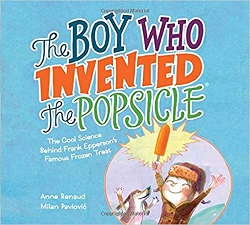 The Boy Who Invented the Popsicle

by Anne Renaud and Milan Pavlovic

This is a picture book biography of Frank Epperson, the inventor of the Popsicle, with a little bit more.

I’m always impressed when children’s nonfiction manages to surprise me. The big surprise in this book is that Frank Epperson invented the Popsicle before household freezers were common. And he first experimented with making them when he was eleven years old, living in San Francisco, during an unusual cold spell.

The book shows that he was an inventor at heart, making a two-handled handcar when he was a kid. He also experimented with making flavored soda water.

The book has experiments you can do at home to go with the text. One is making your own lemon-flavored soda water. (Hmm. Is using baking soda what gave soda its name? The book doesn’t say.)

His first frozen drink on a stick happened when he tried freezing one of these drinks. Later, as an adult, when he saw people eating chocolate-covered ice cream bars, he thought he’d experiment with making more of his frozen drinks on a stick.

He came out with his frozen treats – which he first called the Ep-sicle – in the early 1920s. This was long before homes were typically stocked with a refrigerator-freezer, so they were mostly sold in stores and at special events.

This book gives an interesting story of ingenuity, experimentation, and implementation. The experiments give it a little something beyond the typical picture book biography.