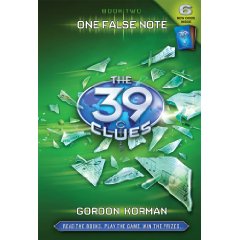 Like the first book in The 39 Clues, The Maze of Bones, One False Note is more than a book.  It’s also a media event, an online game, a collectible card game, and a contest with real prizes.  They’ve gotten outstanding children’s authors to write the books — Rick Riordan wrote the first one, and now Gordon Korman.

Dan and Amy Cahill are travelling the world, trying to find clues to something that has the potential to make them the most powerful people in the world.

They have learned that their Cahill family is responsible for almost all the accomplishments of mankind.  In the first book, they were on the trail of Benjamin Franklin (a Cahill, of course), and in this book they follow the path of Mozart and his sister, Nannerl.

I find I’m not quite buying it.  Yeah, other books tell me that all these significant figures of history were masons, or part of some other big conspiracy.  But all family members?  Benjamin Franklin and Mozart and Marie Antoinette were all supposed to be related?  I can’t quite suspend disbelief so far.

And I’m sorry, I just can’t begin to bring myself to believe in a huge underground complex in Venice, storing the greatest art treasures of the world.  Even with really big pumps, I simply don’t believe that you could find that much solid ground to tunnel in, and who would risk the likelihood of flooding, even if you could?

On top of that, the clues don’t seem too tremendously important, since so many sinister family members are still on their tail.  Why don’t Amy and Dan just do what the other teams are doing:  follow the person who seems to have the latest lead.  Why should they break into their cousin Jonah Wizard’s hotel room, when they could just follow the news about Jonah and see where he goes next?

Okay, you get the idea — I have quibbles about the whole book!  But it is still a fun adventure story, and I doubt kids will be bothered by those things that bothered me.  Amy and Dan are growing on me, kids loose in Europe with only the help of a resourceful and multilingual au pair.  And by the end of the book, they’re on their way to Asia.

I do still plan to keep reading and find out what happens next.  Episode Three is slated to appear in March 2009.