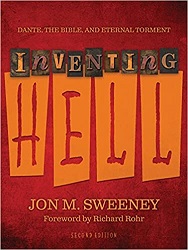 Dante, the Bible, and Eternal Torment

This book is about Dante’s Inferno, the book that more than any other – much more than the Bible, according to Jon Sweeney – shaped our current ideas about Hell. And he makes a strong case.

In the Prologue, the author describes what you’ll find in this book, so I’m going to copy his summary here.

Full of the mysteries of Greek mythology, philosophy, and ancient religions, Inventing Hell will:

— Show you that there was little agreement among Christians, before Dante, about the nature and extent of what we call Hell.

— Illuminate for you the concepts of afterlife that existed before Dante, from ancient Judaism, Virgil and Plato, the teachings of Jesus, the early church, Islam, and medieval theologians.

— Demonstrate that Dante had various medieval apocalyptic sources to help him create the elaborate architecture of Hell that most people know today.

— Shine a clearer light on the sort of Hell that Dante created.

— And reveal that Hell has nine descending circles (in the same way that the devil has hooves and a tail)!

Before we’re done, you may be shocked to realize that for seven hundred years we’ve simply taken Dante’s word for it….

My hope is that you will begin to see the many sources of this complex picture of the afterlife and how Dante’s Hell is a patchwork creation. You should become better able to dissect and appreciate what a magnificent and fantastic world Dante creates, and why it made sense to the people of the late Middle Ages. The world of his Inferno is revealed to be mythical not because Dante made it up. He didn’t. It’s mythical because it was intricately woven in the imagination of a great poet, using a variety of sources, replete with legend, upon which Western civilization once built its most basic understandings of itself. With any luck, you will also find that it does not ring true in the twenty-first century.

This book is especially fascinating in its look at what the ancients thought about the afterlife – even as reflected in the Hebrew Scriptures, but particularly Greek mythology and other sources. I would have liked a little more about what the Bible actually says about judgment after death.

The author does point out that Gehenna, which is translated “hell” in many English Bibles, referred to the Valley of Hinnom, a place outside the city where trash was incinerated. But he neglects to mention that the word translated “eternal” was aeonian and means “of the ages,” not “without end.” So he tends to downplay verses suggesting any kind of punishment after death as borrowing from pagan sources.

Here’s a section at the end of the book:

I haven’t had much to say about God in this book because God is almost beside the point of Dante’s Inferno. Hell is mostly about God’s absence. But one of the things I’ve learned as I’ve grown older is that there is no single image or description of God that is the unvarnished truth. There isn’t even one single image of God in the Bible, and each religious tradition contains a variety of images for the divine. I’ve also come to accept that Christianity holds what seem to be contradictory images of God almost simultaneously. That’s why I’m convinced that each of us has to choose.

There is, for instance, the God that Jesus preaches about in the Sermon on the Mount, who blesses the humble, rewards the meek, and promises the Earth to those who make peace instead of war. This is the Good Shepherd who will expend every effort to save a lost sheep from danger. This is the God that Saint Paul writes about when he beautifully says, “I am convinced that neither death, nor life, nor angels, nor rulers, nor things present, nor things to come, nor powers, nor height, nor depth, nor anything else in all creation, will be able to separate us from the love of God in Christ Jesus our Lord” (Rom. 8:38-39).

But then there is also the God of Jesus’ parable of the Great Banquet (in Matthew 22 and Luke 14), in which the kingdom of Heaven is compared to a rich king putting on a wedding feast for his son. When none of the invited guests show up, he tells his servants to invite others to come; when they don’t come either, he tells the servants to go out to the road and tell every passing stranger that they are invited to a feast. Yet when one man among these last invited guests shows up wearing the wrong clothing, the king is furious. Jesus says, “Then the king said to the attendants, ‘Bind him hand and foot, and throw him into the outer darkness, where there will be weeping and gnashing of teeth.’ For many are called, but few are chosen” (Mt. 22:13-14). This is the God who is compared to a king who rules his subjects, and who regards them as being like sheep and goats. This is the God we also encounter in Revelation, who seems to be looking forward to war and apocalypse, punishment, and the ultimate outpouring of divine fury.

The Inferno offers only one of these images of God, and it isn’t the one that I choose. All we have is a vivid, sad vision of a God who judges, punishes, tortures, and abandons. That doesn’t make sense to me, and although those who have used Dante to preach Hell over the centuries have been able to point to a few biblical passages to support their ideas, they’d still be better stewards of the material to pull out a lexicon of Greek mythology. Ultimately, I choose not Dante’s vengeful, predatory God who is anxious to tally faults, to reward and to punish. Instead I choose the God who creates and sustains us, who is incarnate and wants to be with and among us, and the God who inspires and comforts us. That God is the real one, the one I have come to know and understand and love, and that God has nothing to do with medieval Hell.

But I am completely and totally in agreement with him in rejecting the God of Dante’s Inferno. I do not believe that God engages in gratuitous torture. I do not believe that God has anything to do with Dante’s horrible imaginations of human suffering. This book points out that more of our ideas of Hell came from Dante than from the Bible. Whatever judgment there will be after death, I agree with this author that God has nothing to do with medieval Hell.

This book is worth reading to help you realize how much of our common conception of Hell is was either invented by Dante or popularized by him from stories common in his day.

I don’t mind trusting in an old book when it’s the Bible. But I certainly don’t want to trust in a picture of a place of torture invented seven hundred years ago by a poet. This eye-opening book was full of things I didn’t know about the sources Dante used to create his epic poetry. It all makes for great fiction but questionable theology.

Find this review on Sonderbooks at: www.sonderbooks.com/Nonfiction/inventing_hell.html