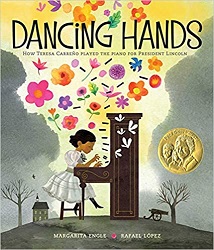 How Teresa Carreño Played the Piano for President Lincoln

Dancing Hands tells the story of Teresa Carreño, who was born in Venezuela in 1853. She learned to play the piano when she was very young.

I love that this book won the Pura Belpré Illustrator Award, because the artist does a wonderful job of using the art to convey the joyful music Teresa played with bright, colorful, and playful images. The author does a good job of using poetic language that was a perfect vehicle for the art. Here’s what’s written on two spreads about Teresa learning to play the piano:

At first, making music seemed magical,
but Teresa soon learned that playing a piano
could be hard work. Sometimes she had to struggle
to make the stubborn music behave
as she practiced gentle songs
that sounded like colorful birds
singing in the dark and light branches
of a shade-dappled mango tree . . .
and powerful songs that roared
like prowling jaguars, beside towering waterfalls
in a mysterious green jungle.

If Teresa felt sad, music cheered her,
and when she was happy, the piano helped her
share bursts of joy. By the time she was six,
she could write her own songs, and at seven
she performed in the peaceful chapel
of a magnificent cathedral, playing hymns
that shimmered like hummingbirds.

When she was eight years old, her family was forced to flee Venezuela because of war, and they came as refugees to New York City. Teresa began to perform in her new country and became famous as the Piano Girl.

But the United States was at war, too. Teresa traveled many places to perform, but this book features the invitation she received to play for President Abraham Lincoln at the White House when she was ten years old.

The president’s son had recently died, so the book focuses on how her joyful playing – and dancing hands – brought comfort to the grieving family.

A note at the back adds details to put it all in context, but this exceptionally beautiful book tells the true story of a young girl who used music to bring joy to others.

Find this review on Sonderbooks at: www.sonderbooks.com/Childrens_Nonfiction/dancing_hands.html