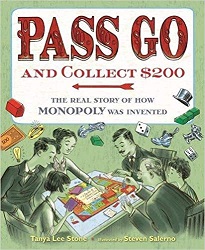 The Real Story of How Monopoly Was Invented

Everybody knows that Charles Darrow invented the game of Monopoly during the Great Depression and made lots of money, right? It’s even explained in the rules.

Turns out, that’s not actually the truth – he took credit – and got money – from a woman’s invention!

Okay, he did improve things. He did make his own boards and add a unique look to the game. But the basic idea of “The Landlord’s Game” was invented by a woman named Lizzie Magie – and she even filed some patents to prove it!

This picture book tells the real story and shows the early versions of Lizzie’s game. Parker Brothers Game Company didn’t buy her popular game, but her friends enjoyed the game and made their own changes and put names on the properties based on the cities where they lived.

The most lasting changes happened in Atlantic City, New Jersey, in 1930. Ruth Hoskins, a young Quaker teacher, and her friends renamed most of the properties after Atlantic City streets and neighborhoods. They were inspired by locations such as St. Charles Place, Ventnor Avenue, and Boardwalk. Someone else came up with color sequences and dividing the properties into groups of three. Atlantic City players added hotels to the game as well.

This was the set that Charles Darrow played.

Like many others, Charles Darrow began making his own boards to play the game. He even added some improvements. But it was the Great Depression, and instead of giving away the games he was making, he sold copies to his friends.

He also marketed the game and got sets he’d made stocked in department stores for Christmas. After they heard what a hit he was creating, Parker Brothers was finally willing to purchase the game from him.

To protect anyone from copying it, Parker Brothers needed a patent. Can you guess what happened next? Parker Brothers discovered Lizzie Magie’s patent. George Parker then remembered Lizzie trying to sell him her game years before. After having made an earlier claim that Monopoly was his brainchild, Charles Darrow admitted he had worked from an existing game, but he didn’t know who created it.

They ended up buying Lizzie’s patent for $500 (the equivalent of almost $9,000 today) for the rights to publish the game. And then the company went on to make millions from it.

This is how the main text of the book finishes up, leaving the reader to decide:

Today, we know that without Lizzie Magie, there likely never would have been a game called Monopoly for us to play and love. Her initial idea is the heart of the game. And without Charles Darrow, Monopoly might not have become America’s favorite board game. All the other folks who added their ideas along the way helped make it great, too.

So who wins in this story? What do you think? Did Lizzie Magie make a wrong move? Did Charles Darrow? How would you have played it? In any case, there is no doubt that millions of people all over the world adore Monopoly.

How nice to have a book that sets the record straight!

Find this review on Sonderbooks at: www.sonderbooks.com/Childrens_Nonfiction/pass_go_and_collect_200.html