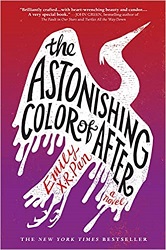 The Astonishing Color of After

Wow. This book ties together symbolism and back story and grief and young love and magical realism and puts it all together into a package with punch. That sounds trite, and this book is anything but trite.

This is how Leigh begins her story.

My mother is a bird. This isn’t like some William Faulkner stream-of-consciousness metaphorical crap. My mother. Is literally. A bird.

I know it’s true the way I know the stain on the bedroom floor is as permanent as the sky, the way I know my father will never forgive himself. Nobody believes me, but it is a fact. I am absolutely certain.

We learn that Leigh’s mother committed suicide. The same day that Leigh’s best friend Axel kissed her and changed everything between them.

But then her mother appeared to her as a giant red bird. She said Leigh’s name. And left behind a feather.

The bird finds a way to tell Leigh to go to Taipei and meet her grandparents for the first time. In Taipei there are more appearances from the red bird. Leigh and Waipo and Waigong start traveling to the places her mother loved. It is Ghost Month in Taiwan. She learns that ghosts move on after forty-nine days. There isn’t much time left for her mother. She wants to figure out what her mother is trying to tell her.

But meanwhile, the red bird shows her a box of incense sticks. When she burns a stick, she sees memories – memories that belong to other members of her family. She begins to understand her mother better, but also her father and her grandparents. She learns why she never met them while her mother was alive. She understands better what her mother was up against.

These memories are interspersed with Leigh’s travels around Taiwan and time with her grandparents and sightings of the red bird. Also interspersed are Leigh’s memories of the last couple years with her friend Axel. The complication when he got a girlfriend who wasn’t Leigh. Their friendship and Leigh’s love of making art – which her Dad thinks she should give up to pursue something “serious.”

I am not always a fan of magical realism. I like fantasy where I understand how it works, which this didn’t fit at all. But Emily X. R. Pan won me over with her well-crafted story. The threads of grief, family history, following your passion, and falling in love with your best friend – all worked together to make an amazing book.

I’m writing this review before I’ve talked with anyone else about it – so this is solely my opinion. I am just not sure if I think this fits the age range for the Newbery. Leigh is fifteen – so there will certainly be many fourteen-year-old readers. I was personally trying to rule out any books that begin with discussions of sex, and this one begins with Leigh thinking about how much she wants to kiss Axel, so it’s not quite that.

I do think that the approach taken in this book is to a child audience – to the teenager as a child. Leigh approaches her grief as a child missing her mother, as a child becoming acquainted with her grandparents. Yes, there’s an aspect of hoping her best friendship with Axel will make the jump to an adult relationship, but that is only starting to happen.

But that’s only my opinion. And I’m only saying I do think this book is distinguished – but I’m making no claims at all to it being most distinguished. Or even if it’s in my top seven. I’m only saying that it made a strong impression on the first reading. I’ll indulge in a little speculation — whatever the committee decides – I hope this will also get some Morris and Printz love. I am amazed that Emily X. R. Pan is a debut author! But even if she doesn’t get any award recognition – this is an amazing book, and I hope many people read it. I will be looking forward to reading more books by this author.

Find this review on Sonderbooks at: www.sonderbooks.com/Teens/astonishing_color_of_after.html