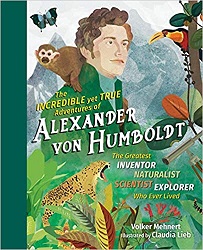 The Incredible yet True Adventures of Alexander von Humboldt

The Greatest Inventor-Naturalist-Scientist-Explorer Who Ever Lived

The format of this book seems odd, since the trim size is large like a picture book, but the print is small and at a higher level of understanding, so this is a book for upper elementary and middle school kids, but it looks like a picture book at first glance. When I realized it is the translation of a German book, that made more sense, as they probably have some different conventions. I think it might find more of an audience if it were the size of a chapter book, but I did appreciate the large paintings illustrating the travels of this explorer.

But the story of his life is indeed fascinating. Most of his fame came through one expedition through South America – but that one expedition lasted years. He was so full of curiosity, he’d keep on changing plans to see the next amazing thing. When he got near volcanoes, for example, he felt compelled to climb them and even go inside the crater where possible. He climbed most of the way up what were then thought to be the tallest mountains in the world without any modern climbing equipment.

Why haven’t I heard of this explorer before? He studied geology, botany, ocean currents, mining operations, and so much more. His lectures in Paris and Berlin after his travels attracted crowds and his books were bestsellers. I suspect part of the reason is that he was Prussian, and the books he wrote were written in German. So I’m glad this book got translated so I could read his story.