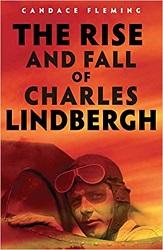 The Rise and Fall of Charles Lindbergh

She groups the book into two parts – the Rise and the Fall. He was only twenty-five years old when he made the transatlantic flight that propelled him into celebrity. He found a wife after that, and their first child was kidnapped, which made him again the focus of the whole nation. We learn all about his background, his upbringing, his ambitions, and his philosophy of life.

By the end of the book, I didn’t like the guy much, because of all I learned in the second half of the book. It tells about how he was duped by Hitler, but also how his own philosophy of life and belief in eugenics set him up to have sympathy with the goals of Nazism. He’d decided that fascism was a better form of government than democracy, because he thought white people with good genes should determine the direction of the country.

Candace Fleming does an excellent job of explaining his beliefs while pointing out problems with them. She shows the seeds of his ideas and how they developed over the course of his life.

She glosses over his life after World War II somewhat – but does mention that he had three other families in Europe, which he kept secret as long as he lived.

The Prologue is a striking way to start the book – at an enormous America First rally, where Lindbergh revved up the crowd. The author doesn’t give the name of the speaker running the rally when this paragraph comes up:

A couple of Firsters stepped assertively toward a reporter. Would the press cover the rally fairly this time? they wanted to know. Or would the newspapers be biased and inaccurate as usual? Many rally-goers believed the media couldn’t be trusted. Their hero, the face of America First and the man they’d come to hear speak tonight, had told them so. “Contemptible,” he’d called the press. “Dishonest parasites.” In a recent speech he’d even told supporters that the press was controlled by “dangerous elements,” men who placed their own interests above America’s. That was why he had to keep holding rallies, he explained. Someone had to tell it like it was. Someone had to speak the impolite truth about the foreigners who threatened the nation. It was time to build walls – “ramparts,” he called them – to hold back the infiltration of “alien blood.” It was time for America to close its borders, isolate itself from the rest of the world, and focus solely on its own interests. It was the only way, he claimed “to preserve our American way of life.”

Candace Fleming did her homework. There is a 6-page bibliography and 30 pages of source notes at the back.

Find this review on Sonderbooks at: www.sonderbooks.com/Teen_Nonfiction/rise_and_fall_of_charles_lindbergh.html