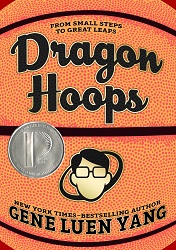 This is a graphic novel memoir about a notable high school basketball season at Bishop O’Dowd High School in Oakland, California, when the author was a teacher there. It was the 2014-15 season, and Mr. Yang had just had a graphic novel published on which he’d been working for six years. He puts himself into the story as he finds out all the hopes and dreams of the students and teachers were centering on finally winning a California state championship with their nationally ranked players. The school had previously had teams go to the championship game many times, but had never actually won.

And so we get the story of the season. The starting players and the coaches are featured. Key games are dramatized. We even get the history of basketball and why Catholic schools have a good record in this sport.

The author keeps the theme of “From Small Steps to Great Leaps” going by highlighting many small steps throughout – as people take a step into something new, and big things result. In Mr. Yang’s own life, he was trying to decide whether to quit teaching and switch to writing comics full-time, as he negotiated an offer to write for Superman.

But with basketball, you don’t know if the “good guys” win. And by making that point early in the book, we didn’t know how the season was going to turn out. The final game is well-dramatized and had me shouting at the end. Yes, shouting at a graphic novel as if it were a live game.

Now, the women’s basketball team at Bishop O’Dowd won the state championship that same year, so I found myself wishing there had been more coverage of that. (There was some, but mostly talking about the older sister of one of the players on the men’s team.) Though to be fair, the book was long enough as it was, and that might have made it unmanageable. Not to mention the difficulty the author might have had trying to get to both teams’ games.

I also wasn’t sure I liked the author writing himself into the story. But by the end, I appreciated it. It added a personal touch and emphasized that these were real kids caught up in big events.

I’m not a sports fan. (Though I was, in fact, a big fan of my high school’s basketball team and took stats for it.) But I am a fan of Gene Luen Yang’s writing, and I enjoyed this book thoroughly. The pacing was good; the history was interesting; and the competition was dramatic.

Find this review on Sonderbooks at: www.sonderbooks.com/Teen_Nonfiction/dragon_hoops.html