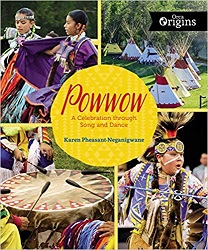 A Celebration through Song and Dance

This lovely book, which is lavishly illustrated with colorful photographs – explains the history of Powows, their important place in Indigenous culture, and the author’s own experiences with them.

I didn’t realize that they are a relatively new kind of celebration, although based on traditional dances that were almost lost.

The chapter “The Origins of Powwow Culture” begins this way:

The first powwow that took place on my home reserve, Wiikwemkoong, was in 1960. Powwow culture was quite new to Indigenous communities back then, because until 1951 it had been illegal for Indigenous Peoples in Canada to practice their culture and ceremonies, which included dance. As well, because my parents had attended Indian residential school, where they were always shamed for their Indigenous identity, there wasn’t much Indigenous culture or tradition in my home. As a young child, before I went to the powwows, my only understanding of what Indian meant was from those Hollywood “cowboy-and-Indian” shows on TV.

She explains how the governments of Canada and the United States made it illegal to celebrate Indigenous traditions and tried to force Indigenous peoples to assimilate and become like the people around them. Some native ceremonies and traditions were lost or almost lost.

She explains how powwows began as those laws were relaxed, and they continued to evolve.

Powwow culture has changed a lot in the last few decades, and there are now many different kinds of powwows, from smaller, traditional, local ones held on reserves and reservations to large competition powwows that take place in stadiums and casinos.

Traditional powwows don’t cost anything to attend. Competition powwows sometimes charge an admission fee. Some powwows focus just on the songs and dances, but others include other activities, like rodeos, fashion shows, music awards, midway rides and dance “specials” – exhibitions of dances from specific regions or peoples. But no matter how small or large the powwow, it is still the same in spirit. It’s still a celebration through song and dance, and it’s public and open to anyone, even people who have no experience. People go to powwows to have a good time – to hear the songs and dance or watch the dancers, see friends, share meals, tell stories and remember the past.

I especially enjoyed the chapter on certain traditional types of dances that are regularly performed at powwows. Most of them are specifically for different groups of people, for example Women’s Traditional Dance, Women’s Fancy Shawl Dance, and Women’s Jingle Dress Dance. Not only in this chapter, but throughout the book are wonderful photos of beautiful outfits worn for these dances. There’s a chapter about other things you’ll find at powwows and traditions for powwows in different regions.

I actually once attended a powwow – in Germany, of all places. I wish I’d had this book then, to better understand what I was seeing. Whether you can attend a powwow or not, this book offers upper elementary children and up a beautiful celebration of Indigenous culture and traditions.