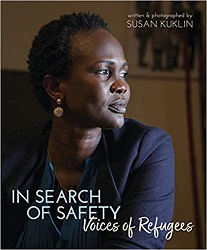 In Search of Safety

written and photographed by Susan Kuklin

Like the author’s book Beyond Magenta, which featured the stories of transgender teens, this book takes an in-depth look at individual refugees stories, with photographs. This paragraph at the front of the book explains it well:

Refugees are people who are forced to leave their country because they are being persecuted. From 1980 to 2018, the number of refugees resettled in the United States each year was between 50,000 and 100,000 people. In 2019, that number dropped to 30,000 people, and in 2020 it dropped again to 18,000. Many of them are from Southeast Asia, the former Soviet Union, Bosnia, the Middle East, and Africa. Some have resettled in the Midwest because housing there is reasonably priced and jobs are relatively plentiful. The five refugees featured in In Search of Safety are from Afghanistan, Myanmar, South Sudan, Iraq, and Burundi. One refugee had been a translator for the U. S. military. Another recently escaped the horrors of captivity by fundamentalist militants. And three spent years in refugee camps, growing up in countries other than their homeland. They all survived wars. They all were carefully screened by several security organizations, such as the United Nations High Commissioner for Refugees, the United States State Department, and the United States Department of Homeland Security. They have all been resettled in the state of Nebraska, where they have been warmly welcomed. This book tells their stories

Some of the stories here are indeed horrific. But hearing detailed stories puts a face on a desperate situation and helps the reader understand that refugees are by no means just looking for a hand-out.

The five stories are told with multiple chapters each, with many photographs, and in the refugees own words. The group that sponsored them to come to Nebraska, Lutheran Family Services, is also featured, and we see what good work they do.

These stories will tear at your heart, but also make you rejoice that people in need were welcomed to a new home.

Find this review on Sonderbooks at: www.sonderbooks.com/Teen_Nonfiction/in_search_of_safety.html