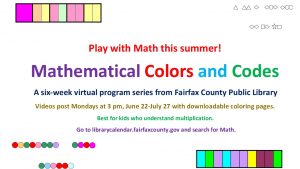 Episode Six of Mathematical Colors and Codes, my Virtual Program Series for the library is up!

Episode Six now looks at the Base Two number system, binary, and puts that into a code. To finish up the series, I talk about more books that play with mathematical ideas.

Like all the other videos in the series, this one has a downloadable coloring page. This one has a chart for a Binary Code.

Here are links to the entire Mathematical Colors and Codes series: