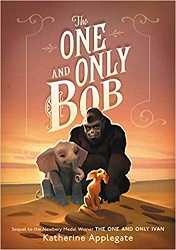 The One and Only Bob

This time, though, they’re up against a hurricane. The little dog Bob, wonderfully voiced with attitude by Danny DeVito, was with his humans visiting Ivan at the zoo when a hurricane and then a tornado struck. Bob didn’t stay with the humans – in fact, he flew through the air. In the story that follows, Bob is involved both in rescuing other animals and in being rescued. He also does some coming to terms with his past.

I thought the summary of what went on in the first book went on a little long. Surely it’s safe to assume that anyone reading this book has read the earlier book. However, once it got past that, Bob’s a fun dog to hang out with. There’s a glossary of doggy terms at the front which have a very believably doggy attitude. The fact that Bob and Ivan used to watch the Weather Channel on Ivan’s little TV at the mall means that Bob believably knows quite a bit about hurricanes.

There were some coincidences, yes. But it all makes for a fun story, and it’s great to spend time again with Bob, Ivan, Ruby, and their humans. We root for resourceful, though small Bob as he takes on a hurricane.

Find this review on Sonderbooks at: www.sonderbooks.com/Childrens_Fiction/one_and_only_bob.html