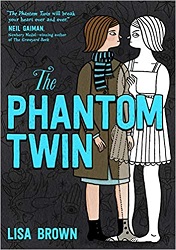 You’ve probably heard of amputees experiencing a phantom limb where their limb was removed. This graphic novel tells the story of a conjoined twin, who after separation experiences a phantom twin.

Isabel and Jane were conjoined twins and had been sold by their parents to a carnival freak show when they were small. They had three arms and legs between them, with the shared limbs mostly controlled by Jane, who also had the most forceful personality.

Jane decided to trust the promises of a doctor who said he could separate them and give them separate lives, but after the operation, Isabel is alive with only one arm and one leg, and Jane has died.

This graphic novel is about Isabel finding her place on her own. Except she’s never fully alone because her twin, now a phantom, stays with her. She tries to stay with the carnival freak show, which has its own problems. And there are many questions about who she can trust.

I will say that the author achieves a happy and satisfying ending, with a message of being yourself and finding people who care.