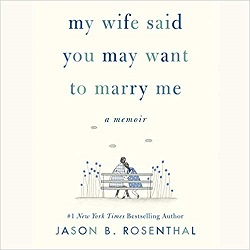 My Wife Said You May Want to Marry Me

by Jason B. Rosenthal
read by the author

On March 3, 2017, beloved children’s author Amy Krouse Rosenthal (okay, she wrote things for adults, too, and even made films, but being a children’s author is what I loved her for) had a column published in the New York Times, “You May Want to Marry My Husband.” It told about her impending death from ovarian cancer, which indeed happened ten days later, but also about what a wonderful man her husband was, how beautiful their life together, and hoping that he would start a new love story after her death, because she wanted him to have a happy life.

This book is Jason’s follow-up. It tells about his life with Amy and their joyful partnership, about the two years he cared for her after her cancer diagnosis, and about dealing with grief. Amy gave him the gift of a platform to talk about end of life, the grieving process, and meeting life after loss with resilience.

As a divorced woman, I’ve dealt with loss. I’m glad that Jason acknowledges that he was lucky to have the loving relationship he had. And Amy blessed it with her last loving act of writing that column. Divorced people (especially those blind-sided by a spouse who leaves before they realize anything’s wrong) don’t get that benediction, but we still have to deal with the absence of someone we love. I appreciated that Jason doesn’t shy away from telling about the good times as if to avoid pain. And his insights are helpful for anyone dealing with loss, even if on the surface, your loss seems quite different from the too-early death of a beloved spouse.

Another thing I have in common with Jason is a succession of losses. Both my parents died, two months apart, last Fall. In the two years since Amy’s death, both Jason’s father and Amy’s father died, as well as the dog that was their family’s companion for many years. Loss piled on top of loss has its own difficult impact. Jason expresses so well the process of dealing with loss upon loss while remembering the love and joy. He doesn’t pretend to have it all together. He talks about times of weeping. And he is again and again thankful to Amy for urging him to fill those empty pages with a new love story.

Listening to Jason’s own voice makes it all the more personal. Listening to this audiobook feels like a brother or a close friend sharing their life and offering encouragement. I understand why hundreds of people have written to him. Amy’s column alone makes me wish it just so happened that I was right for him. (For starters, I don’t live in Chicago.) I have no doubt he’s going to again be a wonderful husband to some lucky woman. (And he has started dating someone. I’m a little envious that he was able to find someone “organically” without using online dating, but hey, everyone’s life is different.)

The part about his life together with Amy was full of joy. I drooled at the description of the home they built – with a wall covered with bookshelves from the basement to the third floor. And I love that they set goals for their relationship while on their honeymoon. They traveled the world together. They made room for quality time with their children and with each other. And they were each other’s biggest fans.

But he’s also got encouraging and uplifting things to say about his life now and about dealing with loss and having resiliency. This is not a sad book, even though it’s centered around a very sad event. It’s the story of a joyful and loving partnership and about someone learning to continue to live a joyful and meaningful life after that partnership ended far too soon.

Like I said, it feels like the author is talking to you personally. I will resist the urge to add to the pile of letters he’s received. Let me just say it now: Jason, thank you for this book. Thank you for telling Amy’s story and your story. Thank you for giving others a window into navigating the journey of loss and new beginnings.

Find this review on Sonderbooks at: www.sonderbooks.com/Nonfiction/my_wife_said_you_may_want_to_marry_me.html

Source: This review is based on an audiobook from Fairfax County Public Library.