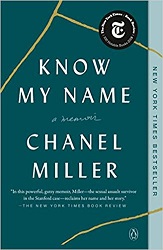 Know My Name is a memoir by the victim in the famous case where she was raped while she was unconscious on Stanford campus by a member of the swim team. He was found guilty and then given a light slap-on-the-wrist sentence. Chanel wrote a letter as Emily Doe to her rapist that was published on BuzzFeed and went viral and touched hearts and lives across the world. (I love the little detail that Joe Biden wrote to her after reading it and said, “I see the limitless potential of an incredibly talented young woman – full of possibility. I see the shoulders on which our dreams for the future rest.”)

Chanel Miller is an incredibly skilled writer. She takes the story of her own rape and explains its terrible impact on her life. She doesn’t excuse it. She doesn’t take it lightly ever. She explains that it impacted her life every single day since the event and will continue to impact it. She points out the many, many failures in the system that made things worse for her. She explains how wonderful it was that her life was saved by two Swedes who happened to bicycle past and took the time to save her. But she gets all her readers wondering what would have happened if they hadn’t come along. You’d think with such witnesses, it would be an easy conviction, but it wasn’t. Not easy in any sense at all.

And yet she leaves us with hope. Her letter, which is included at the end of the book, touched lives across the world. Her book cover design represents the Japanese art of kintsugi, “in which pieces of broken pottery are mended with powdered gold and lacquer, rather than treating the breaks as blemishes to conceal. The technique shows us that although an object cannot be returned to its original state, fragments can be made whole again.”

I checked out this book after I’d already learned I was going to be a panelist for Young Adult Fiction and Speculative Fiction for the Cybils Awards, but I thought I’d read it slowly, a chapter at a time and just draw it out. Instead, I ended up binge-reading it to finish it the night before Cybils nominations opened. Even though I knew what happened, the book ended up being impossible to put down. She makes you understand how it felt to be violated in this way and how difficult it was to put her life back together and go on.

I’m going to finish this review by quoting her final paragraphs. I’m not giving anything away. Most of you will have heard of her story. But I’m quoting her to show how powerfully she brings hope to victims everywhere, and to people everywhere who ever wonder what their own lives are worth.

I began this story alone as a half-naked body. I remembered nothing. There was so much I did not know. I was forced to fight, in a legal system I did not understand, the bald judge in the black robe, the defense attorney with narrow glasses. Brock with his lowered chin, his unsmiling father, the appellate attorney. The obstacles became harder, I was up against men more educated, more powerful than me, the game rougher, more graphic, serious. I read comments that laughed at my pain. I remember feeling helpless, terrified, humiliated, I cried like I’ve never cried before. But I remember the attorney’s still shoulders as guilty was read. I know Brock slept ninety days in a stiff cot in a jail cell. The judge will never step foot in a courtroom again. The appellate attorney’s claims were shut down. One by one, they became powerless, fell away, and when the dust settled, I looked around to see who was left.

Only Emily Doe. I survived because I remained soft, because I listened, because I wrote. Because I huddled close to my truth, protected it like a tiny flame in a terrible storm. Hold up your head when the tears come, when you are mocked, insulted, questioned, threatened, when they tell you you are nothing, when your body is reduced to openings. The journey will be longer than you imagined, trauma will find you again and again. Do not become the ones who hurt you. Stay tender with your power. Never fight to injure, fight to uplift. Fight because you know that in this life, you deserve safety, joy, and freedom. Fight because it is your life. Not anyone else’s. I did it, I am here. Looking back, all the ones who doubted or hurt or nearly conquered me faded away, and I am the only one standing. So now, the time has come. I dust myself off, and go on.

I recommend many books. Let me urge you to read this one. It will leave you with more compassion than you had before, and with more power, and more hope.

Find this review on Sonderbooks at: www.sonderbooks.com/Nonfiction/know_my_name.html