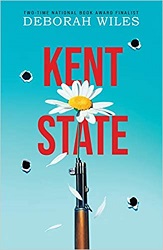 This short novel in verse could almost be listed as nonfiction, because the author strives to accurately present a picture of what happened fifty years ago, on May 4, 1970, when the National Guard opened fire on college students, and four were killed and nine wounded.

The story isn’t told in one neat, tidy package. Instead, we get multiple voices. It’s not defined who’s speaking, but the voices are delineated by font and size and position on the page. We can eventually figure out who’s speaking. Some, in fact, have to work to be heard.

The effect is a well-rounded picture. I liked the way it reminded me of the conversation today around the protests in Portland. Some say they’re peaceful protestors. Others that they’re terrorists. Some say they were exercising their first amendment rights, and others that they were thugs destroying property. Some say there were outside agitators. That’s the kind of thing we find here, as Deborah Wiles lets many voices speak – fellow students, townspeople, National Guard members, faculty, members of Black United Students, students who did not agree with the protests, and more.

But the big point of the book is about the four children who died. We do get to hear a lot about them. One wasn’t even involved in the protests, but was simply walking to class. The National Guard troops who fired were barely older than the ones who were killed.

Some of the voices say that the white students didn’t really believe the National Guard would use real bullets. The black students did, so most of them heeded a warning to stay away. We get all the circumstances leading up to the deaths and then the tragic order to fire.

The opening chapter addresses the reader as a new friend who needs to hear the story. The different voices are going to tell this new friend what happened. Here’s how that chapter ends:

Let me make room for our new friend.
We don’t want to scare you away, friend.
Take the most comfortable chair.
Sit. Listen.
Make up your own mind.
Open your heart.
Here is what is most important:

They did not have to die.

Pull up a chair, take an hour, and read this book. It will open your eyes. With the author, I hope that this knowledge will help avoid future tragedies.

After the audiobook version won the 2021 Odyssey Award for the audio production, I decided to listen as well and add a review of that.

I can easily see why it won. The production features a full cast, and they included sound effects, especially the sound of bullets, plus original music in the transitions, music that sounded appropriate for the time of the story.

The book was narrated by a full cast, which is sometimes hard to follow, but in this case it was easier to instantly tell who was speaking and remember things they’d said before. For example, a voice representing students repeats the same line several times, and when I was hearing her voice speaking the line, I easily remembered that I’d heard that person say the same thing before. The producers did a good job of using voices that sounded different from each other — voices for students, for townspeople, for the National Guard, for the black students — and it was easier to have an idea of who was speaking from the voice than it had been from simply a change in font.

The audio production is short — only two hours — and even though I’d already read the book, I was riveted by the audio version, making the words come to life. Since the book was written in the form of unrhymed poetry spoken by different people affected, and since they did a great job with the sound effects, the audio version is the perfect way to experience this book.

Find this review on Sonderbooks at: www.sonderbooks.com/Teens/kent_state.html