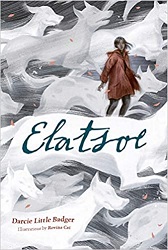 This lovely paranormal fantasy is written by a member of the Lipan Apache tribe and features a Lipan Apache teen girl. At first, I thought it was just Native Americans in the world of the story who were aware of paranormal magic, as the title character has her own ghost dog. But it quickly became apparent that this is a world where magic is taken for granted. Ellie’s best friend is a descendant of Oberon who can conjure will-o’-the-wisps, and his sister is in love with a vampire, or as they call it, one of the Cursed. The magic that causes vampirism is European magic, but Ellie’s family is aware of magic rooted in their ancestral lands. They tell stories of Ellie’s Six-Great Grandmother who healed the land from monsters.

As the book begins, Ellie’s cousin dies in what appears to be a car accident. But that night, he appears to her in a dream and tells her he was murdered. As it happens, the murderer he names is white, rich, and powerful. It won’t be easy to make the charge stick.

One thing I love about this book is that this is not one about children-do-dangerous-things-without-telling-their-parents. Ellie tells her whole family about her dream and they believe her and agree to work together to bring the murderer to justice and make sure that her cousin’s ghost rests. Ellie’s family has a lot to do with this struggle against evil and it’s super refreshing.

This was a wonderful book, engagingly written, and I loved the way it wove in Native American culture. But Ellie’s simply a lovable character, so this isn’t at all a niche book.

Ellie bought the life-sized plastic skull at a garage sale (the goth neighbors were moving to Salem, and they could not fit an entire Halloween warehouse into their black van). After bringing the purchase home, she dug through her box of craft supplies and glued a pair of googly eyes in its shallow eye sockets.

“I got you a new friend, Kirby!” Ellie said. “Here, boy! C’mon!” Kirby already fetched tennis balls and puppy toys. Sure, anything looked astonishing when it zipped across the room in the mouth of an invisible dog, but a floating googly skull would be extra special.

Unfortunately, the skull terrified Kirby. He wouldn’t get near it, much less touch it. Maybe it was possessed by a demonic vacuum cleaner. More likely, the skull just smelled weird. Judging by the soy candles and incense sticks at the garage sale, the neighbors enjoyed burning fragrant stuff….

Kirby had progressed a lot since his death. Ellie still wasn’t allowed to bring him on school property, but since the sixth-grade howl incident, Kirby hadn’t caused any trouble, and his cache of tricks had doubled. There were mundane ones: sit, stay, heel, play dead (literally! wink, wink!), and track scents. Moreover, the door had been opened to a bunch of marvelous supernatural powers. He just had to learn them without causing too much incidental chaos.

The illustrations at the front of each chapter add to the beauty of this book.

I’m super impressed that this is a debut novel and looking forward to more by this author.

Find this review on Sonderbooks at: www.sonderbooks.com/Teens/elatsoe.html