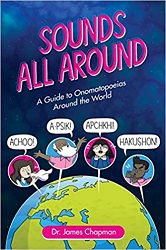 A Guide to Onomatopoeias Around the World

Here’s what it says on the page at the front of this book:

Learning the sounds animals make is an essential part of language learning. Spending hours and hours pretending you’re a chicken or a dog is not only great fun, it’s educational, too. If you grew up speaking English, you probably already know your woofs and meows from your clucks and quacks – but how does the rest of the world describe sounds?

There’s a whole world of words for all the sounds you know and love! (And even some words for sounds that don’t show up in English.)

The words that imitate sounds are known as “onomatopoeia.” These words are a wonderfully strange and interesting part of language. After all, we hear the same sounds, but we interpret and write them differently in different languages.

If you sing “Old McDonald Had a Farm” in French, your farmyard ducks go “coin coin” instead of “quack quack,” and in Russian they go “krya krya.” From the sound of a speeding car, to the sound a dog makes, to the sound of rain, there are almost as many words for these sounds as there are languages!

The format of this book is chapters of types of sounds with spreads looking at one certain type of sound in multiple languages. It’s in graphic novel format, so we see the sounds in speech bubbles coming from cartoon animals or characters or things. The chapters are “Animal Noises,” “On the Farm,” “In the Zoo,” “Loud Noises,” “Natural Noises,” “Noisy Machines,” “Sounds of the Human Body,” and “Sounds of Emotion.”

This isn’t a book that fits neatly into a curriculum anywhere. You couldn’t use it to learn a language. But it’s super fun to read and to think about. This is a book that could easily capture a child’s imagination. I know it captured mine.

The one little thing that I wish it had is a pronunciation guide, since I know in some languages, English letters don’t make the same sounds. Though perhaps they left that out because once they started, it would have gotten tricky with so many languages used. This keeps it light and fun, but still informative.

Find this review on Sonderbooks at: www.sonderbooks.com/Childrens_Nonfiction/sounds_all_around.html