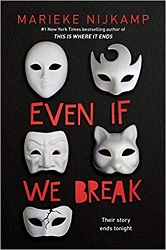 Even If We Break

Even If We Break is a Then There Were None-style thriller for teens. As the book begins, five teens are making their way to a high-tech mountain cabin owned by one of them. There was a storm the day before that blocked the path for the car and boulders on the path still make it difficult for the two who have mobility issues.

We get the perspective of different teens in each chapter. Finn and Ever are transgender, with Ever using they/them pronouns. Finn uses crutches and Maddy, who is autistic, has been in an accident recently that changed her from a star lacrosse athlete to someone whose knee hurts when she walks, especially over boulders. Liva is the one whose parents own the cabin, and Carter works for her father’s company.

They are all high school students, but Liva, Carter, and Finn have graduated and will be going off to college at the end of the summer. So their three years of playing a role-playing game together will come to an end. They’re going to have one last immersive game experience in the mountain cabin first. Even though Finn hadn’t been joining them as often lately, and even though Liva’s ex-boyfriend Zac had stopped altogether.

There are stories that the mountain is haunted, and Ever, the gamemaster, weaves that into their adventure. Every adventure started with a murder, as the group are Inquisitors from the land of Gonfalon, and the Council hires them to use magic and skills to solve crimes. For this adventure, a councilor herself (represented by a pile of blankets) is dead.

But as the adventure begins, things begin to become all too real. The power goes out. They hear a music box, just like the story of the haunted mountain. Then bloody handprints. And yes, there’s murder. And that high-tech cabin? It’s hard to get out when it locks.

Never mind solving the murder – the teens who are left want to escape with their lives.

The author pulls the story off well. I’m tempted to say more, but won’t for fear it will give you clues. I did love the central role of the transgender teens and enjoyed that all the characters had emotional depth.

And I was very glad I had a chance to finish it in one sitting! This is not a book you want to set aside.

Find this review on Sonderbooks at: www.sonderbooks.com/Teens/even_if_we_break.html