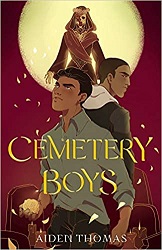 I’ll confess right up front that I was predisposed to like this book because it features a transgender main character in a paranormal fantasy. But as I read, it’s also a well-written paranormal fantasy even if that weren’t true.

Yadriel has grown up in a Latinx culture in East Los Angeles where his family trains to become brujos and brujas. But when he got to be fifteen years old and refused to become a bruja, his family wasn’t ready to take him through the ceremony to make him become a brujo.

So the book begins with Yadriel and his friend Maritza going through the ceremony on their own. Lady Death indeed blesses him and bonds him to his portaje, the ritual dagger of a brujo.

As soon as the ceremony finishes, though, all the brujx sense the sudden death of one of their own, Yadriel’s cousin Miguel. But no one can find his body. So, to prove himself, Yadriel summons Miguel’s spirit – and ends up summoning someone else entirely – a kid from his school named Julian. Still trying to prove himself, Yadriel unsuccessfully tries to help Julian pass on to the other side, but Yadriel’s portaje won’t cut Julian’s tether to an object he cares about.

Still Julian agrees to go nicely if Yadriel will first help him check on his friends. It looks like there might be a connection between Miguel and Yadriel, because both their bodies are missing. But there’s a deadline – Dia de Muerte is coming, and Yadriel wants to prove himself by then and join with the other brujos.

Most of the book is the complications of hanging out with an irrepressible spirit and trying to solve the mystery of what happened. And of course trying to keep the spirit hidden from the other brujos who won’t like that Yadriel summoned him on his own. It’s all told in a compelling way, and the reader cares more and more about Yadriel and Maritza and Julian – and more sorry that Julian’s dead.

This is an own voices book, coming from a queer trans Latinx author who shows us both the beauty and frustrations of being part of this culture. They don’t tell us how much of the magical part is based on truth.

Find this review on Sonderbooks at: www.sonderbooks.com/Teens/cemetery_boys.html