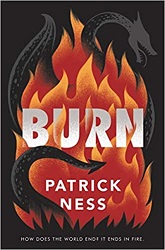 Burn is set in 1957, just before the Soviets launched a satellite, in an alternate reality where dragons exist. As the book begins, Sarah’s father is hiring a dragon to do some work on their farm in Washington State, because that’s cheaper than hiring human labor.

Sarah is mixed-race, and her mother died two years ago. She has a hard time with the deputy sheriff, and so does her Japanese-American boyfriend. Unexpectedly, the dragon they’ve hired helps them out.

Chapters alternate to follow a mysterious teenage boy traveling across Canada toward Washington. Gradually, we learn that he’s a trained assassin, and he is a Believer who prays to the Mitera Thea, the Goddess of the dragons. The Mitera Thea is guiding him to fulfill a prophecy and kill a girl in Washington.

Meanwhile, the dragon on Sarah’s farm tells her about a prophecy that she will stop the destruction of the world. And that an assassin is coming to kill her.

In the middle of the book, these things collide in unexpected ways – and many characters wind up in a “nearby” parallel universe, one without dragons, one that very well might be our own. Things play out in interesting ways.

Now, I don’t actually believe in parallel universes. And I think that if they were possible, a universe where dragons exist would be entirely and completely different from – and be inhabited by completely different people than – a universe where dragons did exist. Technologies would be different, and pretty much all of human history would have played out differently. In addition, I have a problem with parallel universes in books, because if every possibility exists in a universe somewhere, why are you telling a story about this one? It seems like choices don’t matter as much.

However, with all that said, if you accept the premise that “nearby” parallel universes are possible, the author plays with interaction between them in a fun way. I enjoyed the explicitly ambiguous prophecy that no one knows how it will be fulfilled until it is – and the dragon acknowledging that’s the nature of prophecies.

This is a fun book about dragons and prophecy and trying to keep the world from being destroyed – and find love at the same time.

Find this review on Sonderbooks at: www.sonderbooks.com/Teens/burn.html