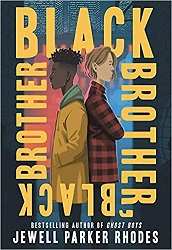 As the book opens, Donte is sitting in the principal’s office, waiting to be punished for something he didn’t actually do. When they won’t even listen to his side and he gets angry, the police are called and Donte is arrested and taken from the school in handcuffs.

Donte’s mother is a lawyer. She’s going to go farther with his case. But Donte is especially angry at Alan, the kid who threw the pencil, a kid who’s blatantly racist. That kid is also the star of the fencing team.

Then Donte learns that a black Olympic fencer lives nearby and works at a Boys and Girls Club in Boston. Donte decides to learn to fence, in hopes of beating Alan at his own game.

The book is good at explaining the art of fencing to the reader – the mind game aspects as well as the physical aspects. We’re rooting for Donte as he learns to look beyond personal vengeance and think about how to work for justice.

It’s not a long story, but it grips the reader, and points out some contemporary issues. In a note at the back, the author mentions some awful stories of black children being arrested at school for minor offenses. I hope the book itself will help open eyes and open hearts.