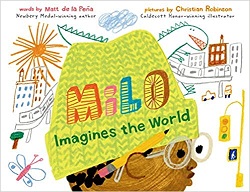 Milo Imagines the World reminds me of the book by these collaborators that won the Newbery Medal and Caldecott Honor, Last Stop on Market Street, because it’s also about a boy taking public transportation.

This time it’s the subway. And the picture in the subway station puts me right there with Milo and his older sister, who is looking at her phone, as are many people in the station.

When Milo gets on the subway, we’re told:

These monthly Sunday subway rides
are never ending, and as usual, Milo is a shook-up soda.
Excitement stacked on top of worry
on top of confusion
on top of love.
To keep himself from bursting, he studies
the faces around him and makes pictures of their lives.

We see the imaginative pictures that Milo draws about the people on the subway.

When a white boy in a suit with a perfect part and bright white Nikes boards the train, Milo imagines him as a prince going to his castle.

More interesting people board the train, including a bride and a crew of breakers.

When Milo and his sister get off the train, we see them going through a metal detector and visiting their mom, who’s wearing an orange jumpsuit, in a room with guards and other families spending time together. To Milo’s surprise, the boy in the suit is there, too. That makes Milo rethink some of his imaginings.

But the book ends with Milo showing his mom a picture of their family at home, together, eating ice cream on their front steps.

This book works on many levels. It’s about a subway ride, imagination, having things in common with others, seeing beyond stereotypes, and having an incarcerated parent. But I’m going to approach it as a great story. And that’s how it’s going to be able to reach kids who will benefit from all those other levels.

Find this review on Sonderbooks at: www.sonderbooks.com/Picture_Books/milo_imagines_the_world.html