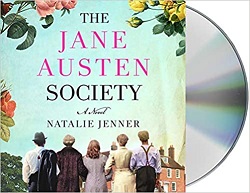 Oh, The Jane Austen Society is delightful in every way! I had recently discovered I can listen to eaudiobooks while pulling holds at the library and was finding myself making more lists of books to pull to get more time to listen to this book. I was surprised to learn the author is a debut novelists, and disappointed that I can’t immediately read more of her books.

The Jane Austen Society is set shortly after World War II, focusing on a disparate group of people from Chawton, the final home of Jane Austen. Tourists already came to Chawton looking for signs of Jane, but there was no place focusing their interest. The Knight family that owned the estate has no direct heir, so the things that Jane once lived among were in danger of getting lost. A group of people living in the village discover that they all love Jane Austen, and decide to do something about preserving her legacy.

A lot of the charm of the novel is discovering how the different people all develop their love for Jane Austen’s novels and are surprised to learn this love is shared. Yes, there are romances among the characters, and yes, some of them echo the situations from Jane Austen’s novels.

There are also problems with the inheritance of the estate, and personal problems as so many in the village are grieving losses from the war. There’s even a movie star who loves Jane Austen and has some money to bring to the project. Her fiancé is interested in pleasing her by helping to back the project, though it’s questionable how much his heart is in it.

A lot of the story is told from the perspective of the local widowed doctor, who knows everyone in the village and sees to everyone’s medical needs. Which also means he feels personally responsible when there are people he can’t save, especially when that included his own wife. Then there’s the farmer who does odd jobs for everyone in the village, and the maid on the estate who had to leave school early but is fascinated by the books in the family library, which once Jane Austen might have read.

In all, the author does a magnificent job of showing us a village of people in complicated relationships with one another – rather like Jane Austen herself would do.

And it’s all narrated with the marvelous deep voice of Richard Armitage, distinguishing between the characters enough to help us follow the large cast as they interact. (I am never very fond of how British folks do American accents, but all the lovely British accents made up for it.)

A special treat for me, a hardcore Jane Austen fan, was the many discussions among the characters of fine points in Jane Austen’s books, discussions of favorite characters, of blind spots in the characters, and this or that subtle point made. The delight of eavesdropping on these conversations added to my enjoyment of the book. And, yes, I knew all the references. Other hardcore Jane fans will enjoy that part, too, though it’s not a requirement to love the book.

Find this review on Sonderbooks at: www.sonderbooks.com/Fiction/jane_austen_society.html