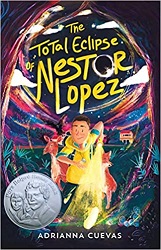 The Total Eclipse of Nestor Lopez

The Total Eclipse of Nestor Lopez was fun to listen to, though I had to suspend my disbelief regarding the fantasy.

The premise is fun – Nestor Lopez can understand animals and talk to animals. How the story goes – that there happens to be an animal witch in the woods near his new home and that this powerful witch needs the help of a local bully in Brandon’s grade and that it would resort to threatening children to stop trying to thwart it – well, I almost expected the Scooby-Doo line, “And I would have gotten away with it, too, if it hadn’t been for those pesky kids!”

Why did I keep listening though? I kept listening because I really liked Nestor and his new friends. Even if what the animals said didn’t seem very animal-like, I still enjoyed his ability. But mostly I felt for Nestor always having to move to a new town, with his father in the army, and never staying long enough to make friends.

Now his dad’s in Afghanistan, and Nestor’s got a lot of worries about that. But this time, they decided to go back to the town where his dad grew up and stay with his abuela.

It also just so happens that this year the sixth grade trivia team has a focus on animal facts. I could accept that coincidence because it added to the fun. It was a little harder to believe the faculty sponsor of the trivia team would be personally involved with the witch. (Or that she’d have gone to a place due to have an eclipse if she was trying to stop being involved – but that’s a little close to being a spoiler.)

So even though I have a lot of quibbles with the story line – even if I accept that Nestor can talk to animals – this book was still a whole lot of fun to listen to. I also appreciated that the narrator slipped in and out of Spanish as naturally as Nestor and his family would do. And I liked a book about a kid having to deal with his dad being deployed over and over again.

Find this review on Sonderbooks at: www.sonderbooks.com/Childrens_Fiction/total_eclipse_of_nestor_lopez.html