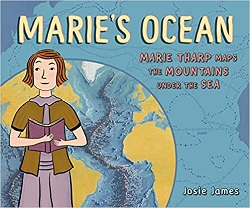 Marie Tharp Maps the Mountains Under the Sea

Dramatized in graphic novel format with speech bubbles, this book tells of the life of Marie Tharp and how she overcame prejudice against women and became the first person to map the ocean floor.

First it shows her childhood interest in science and beginning jobs, which were never as challenging as she could handle. But then everything came together when Bruce Hazeen, a graduate student at Columbia asked her to plot sounding data of the ocean floor from many ships going across the Atlantic Ocean, using sonar.

It goes on to show how Marie discovered something in common in the plots from the ships’ data.

And then I noticed something curious. A V shaped cleft ran through each of the profiles I had drawn.

Could there be a crack in the center of the mountains of the Mid-Atlantic Ridge as deep and wide as the Grand Canyon?

It shows how this discovery supported the continental drift theory, which was considered scientific heresy at the time.

Then Bruce was asked to map the locations where transatlantic phone cables had broken due to earthquakes. When Marie plotted the earthquakes – they were all happening along the rift valley she had discovered in the middle of the ocean.

The scientific community was still skeptical of her work. Then Jacques Cousteau towed an underwater camera across the Mid-Atlantic Ocean floor and showed the world that Marie’s rift valley indeed existed.

Thereafter, scientists’ and the public’s opinion of the rift valley and Wegener’s theory of continental drift slowly began to shift. Opinion also began to change regarding women at sea. In 1965, after fifteen years working at my desk, Bruce offered me my first spot as a woman aboard a research vessel.

Heinrich, Bruce, and I continued to collaborate and produced an elaborate painting called the World Ocean Floor panorama in 1977. This glorious map depicts a one-world ocean whose hidden mountains and valleys, created by the immense forces of Earth, erupted off the canvas and dispersed the idea of a flat and featureless seafloor.

By dramatizing her story, this book brings you into the challenges Marie faced as a scientist and how completely she triumphed over them.