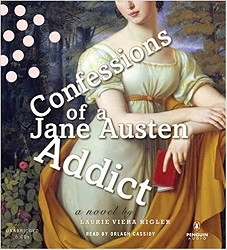 Confessions of a Jane Austen Addict

I’m on a roll of reading Jane Austen take-offs, and this is one of the silliest, or I should probably say most light-hearted.

Courtney, a modern young woman who lives in Los Angeles, recently caught her fiancé cheating on her. As part of her healing process, she did her usual Jane Austen binge. But one morning she wakes up to find herself in the home of a young lady who lives in the English countryside during Jane Austen’s time, in the body of that young lady.

The young lady is named Jane Mansfield, and she has recently had a terrible fall from a horse. When Courtney tries to tell people that she is not, actually, Jane, they try to help by bleeding her (with dirty equipment!) and threaten to put her in an asylum. She has to go along with it. Surely it’s temporary, and she can just humor them, but it seems awfully realistic and she doesn’t want to live it out in an asylum.

The book never does adequately explain why this body-switching happened. There’s talk about the fluidity of time and a wish and trauma and… well, whatever it was, it’s fun that it happened. (I also wasn’t completely satisfied about what her “destiny” was that would take her back, but I won’t give that away.) For a fantasy fan like me, that aspect was awfully murky.

This book is also a lot more raunchy than most Jane Austen take-offs. Courtney had been sexually active with her fiancé and other people before him, and she appraises the men she meets with that in mind – which does not really fit with Jane Austen’s England. But now Jane’s mother very much wants her to marry Mr. Edgeworth – and Courtney can’t remember why Jane was opposed to that plan. But she gets flashes of Jane’s memories, and she’s afraid that even in a different body, she’s attracted to an unsuitable man.

Along the way, there’s lots of humor as Courtney’s modern sensibilities clash with life in Jane Austen’s England. And though some things appall her – such as having to use a chamber pot – she begins to make the best of the situation – and the reader (or listener) gets to enjoy it with her.

Find this review on Sonderbooks at: www.sonderbooks.com/Fiction/confessions_of_a_jane_austen_addict.html