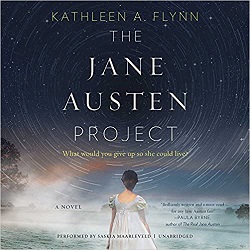 by Kathleen A. Flynn
performed by Saskia Maarleveld

Here’s another book featuring time travel to Jane Austen’s time. My time listening to this audiobook in the car happened to overlap with listening to the eaudiobook Confessions of a Jane Austen Addict. But this one meticulously explained how the purposeful and planned time travel happened – much more satisfying to the science fiction reader in me.

You see, in the future, after the “die-off,” time travel has been developed. Rachel Katzman, a doctor who has done work with disaster relief and happens to love Jane Austen novels, applied and was accepted to the Jane Austen Project, an undertaking of the Royal Institute for Special Topics in Physics.

Her mission, together with Liam Finuca, an Austen scholar, is to go back in time to 1815, not long before Jane Austen’s death. They are posing as a brother and sister, Dr. William Ravenswood and his sister Mary. They arrive in 1815 with counterfeit money strapped to their bodies. They plan to ingratiate their way into the society of Jane’s brother Henry, and from there make the acquaintance of Jane. And they want to be good enough acquaintances to somehow get a copy of the complete version of The Watsons as well as find the missing letters, before those letters get burned by Jane’s sister Cassandra, and maybe diagnose the disease that killed Jane.

Can they do all this? They’ve got a letter of introduction from an Austen relative in Jamaica, so it would be difficult to check. But can they win Henry over, and then Jane? It helps when Henry gets sick and Liam becomes an attentive doctor friend checking on him. Henry doesn’t know that it’s “Mary” who’s the real doctor, telling her “brother” what questions to ask.

There begin to be signs that they’ve disturbed the “probability field,” so they have worries about what they’re changing by all their actions in their own past.

This book was delightful. I loved the way they had to know all about Jane Austen’s life and about customs of the time, so that gets conveyed to the reader (unlike the poor clueless heroine in Confessions of a Jane Austen Addict). The book pulls you in and helps the reader see all the difficulties one would face if you tried to be accepted into the society of 1815 without detection.

This book is like Confessions of a Jane Austen Addict in that part of the difficulty – and some of the humor – is a woman with more modern attitudes regarding sex trying to fit in during that time, when attitudes are very different. Fair warning to Jane Austen fans: This book has more sex scenes and sexual situations than Jane Austen’s books do.

I’m not completely satisfied with the ending, when it’s revealed, that yes, their time travel changed some things. (I think it’s not a spoiler if I don’t say what was changed, parts of which made me happy.) But then, I always have trouble with time travel paradoxes. I did appreciate that they attempted to explain the repercussions.

And the book is so much fun! You forget it’s fiction and feel like you’ve been immersed in Jane Austen’s time and Jane Austen’s society. A real treat for Jane Austen fans.

Find this review on Sonderbooks at: www.sonderbooks.com/Fiction/jane_austen_project.html