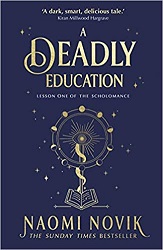 Lesson One of the Scholomance

Oh, this book is wonderful. It’s the story of magical kids sent to wizard school – but this wizard school wants to kill the students.

Naomi Novik’s world-building in this new series is incredible. All kinds of details about this school for wizards, existing in the void, where maleficaria – monstrous creatures – come to feed on people who use magic. And the heroine of the story, Galadriel, daughter of a good witch who lives in a mundane commune and is loved by everyone – was born to balance that out, destined to be a powerful sorceress wielding death and destruction. And nobody likes her.

I decided that Orion needed to die after the second time he saved my life. I hadn’t really cared much about him before then one way or another, but I had limits. It would’ve been all right if he’d saved my life some really extraordinary number of times, ten or thirteen or so – thirteen is a number with distinction. Orion Lake, my personal bodyguard; I could have lived with that. But we’d been in the Scholomance almost three years by then, and he hadn’t shown any previous inclination to single me out for special treatment.

Selfish of me, you’ll say, to be contemplating with murderous intent the hero responsible for the continued survival of a quarter of our class. Well, too bad for the losers who couldn’t stay afloat without his help. We’re not meant to all survive, anyway. The school has to be fed somehow.

Ah, but what about me, you ask, since I’d needed him to save me? Twice, even? And that’s exactly why he had to go. He set off the explosion in the alchemy lab last year, fighting that chimaera. I had to dig myself out of the rubble while he ran around in circles whacking at its fire-breathing tail. And that soul-eater hadn’t been in my room for five seconds before he came through the door: he must have been right on its heels, probably chasing it down the hall. The thing had only swerved in here looking to escape.

The whole elaborate world-building is fascinating and surprising. In that world, kids brought up in wizard enclaves have big advantages – being able to share power, and with automatic alliances. You need alliances to survive graduation – when the seniors on the bottom level of the school have to get out through the graduation hall, where maleficaria have been building up.

Those who aren’t in an enclave, like El, are at a disadvantage. It turns out she’s got amazing abilities – but her natural affinity is toward death and destruction, and she’s determined not to suck the life force out of any living creatures. Which makes things more difficult for her. And when Orion is anywhere near, anything dramatic she pulls off is assumed to be his work.

It’s hard to explain the charm of this book. If you like elaborate world-building at all, this one is amazing. And you’ll be pulled in by the grumpy witch trying not to become an evil sorceress, but trying to survive. And she might have to make some friends and kill some monsters to do so.

The book ends in a way that hints at a big conflict in the future. Nothing’s ever simple for El! I plan to preorder Book 2, coming out in September. I don’t even want to wait for a library copy.

Find this review on Sonderbooks at: www.sonderbooks.com/Fiction/deadly_education.html