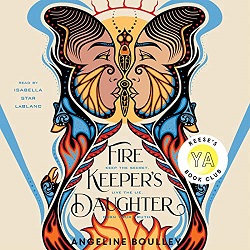 Firekeeper’s Daughter is an amazingly good mystery/thriller for teens by an indigenous author. From the cover image, I mistakenly expected a fantasy, but got a lovely contemporary novel focusing on Daunis Fontaine, the daughter of a Native American Firekeeper and a non-Native woman. Only her mother is still alive, but Daunis has embraced Native American spirituality and the traditions of her people.

Since I listened to the audio version, I don’t trust myself with spelling the Native American terms freely used through this book in a natural way, but the narrator helped make their use seamless. As the book begins, Daunis has graduated from high school, but has not left for college because she doesn’t want to leave her grandmother, who recently had a stroke, and who is being cared for by Daunis’s mother. Daunis is also troubled by the recent death of her uncle, a chemistry teacher, which neither she nor her mother believes was really from an overdose of meth.

Daunis had been a star on the hockey team, but an injury has sidelined her, though she still supports the team with her brother the captain this year. An attractive new kid has come to town, but he turns out to have some secrets.

And before long, there are more deaths and more people using meth, and Daunis gets pulled into the investigation and mystery of who is behind the meth ring and how does that relate to her uncle’s death. It all seems tied up in the reservation and the hockey team, and Daunis has insider information on both.

This book is wonderful on many levels. Yes, it becomes suspenseful and yes, our main characters are in danger. But it also works as a richly emotional story before any suspense is present, about romance and family and belonging and caring for others and learning to trust. There are also underlying issues as to Native American people and their treatment by law enforcement, and citizenship issues on the border with Canada.

Find this review on Sonderbooks at: www.sonderbooks.com/Teens/firekeepers_daughter.html