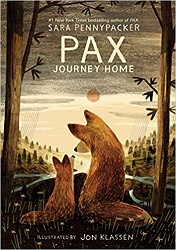 Wonderful! A sequel to the beautiful book Pax, which is about a boy and his fox, separated by the boy’s father and trying to reach each other despite perilous obstacles — and a war.

In Journey Home, the war is over, but devastation has been left behind. Among that devastation, Peter’s father was killed in the war. And for the wildlife, rivers and streams and a reservoir were polluted. The entire town where Peter had lived when his parents were alive was abandoned.

This is a sequel, and you should read Pax first. I will try not to give away what happens in the first book, but Peter and Pax are again on quests that make them encounter each other.

Pax has a family now, but humans are encroaching too near, and he wants to find them a new den. However, in his search, his most adventurous kit comes along, and they have to take a roundabout path because of more humans.

Peter has lost his family — his father died in the war, on top of the loss of his mother before the first book started. Vola sees him as family, but Peter has learned that it’s better not to love — you’ll only lose them and get hurt again. He goes off to join the Junior Water Warriors, who are spending the summer cleaning up the polluted rivers left behind by the war. Peter does not intend to come back.

But he didn’t expect to encounter Pax.

For awhile, I thought this book a little too bleak, but Sara Pennypacker pulls off a transformation in Peter’s heart with exactly the right touch — not too sentimental and not even too predictable or unbelievable. The result is a powerful and inspirational story of healing. Pax is even more firmly rooted in my heart than he was before.

If you didn’t catch Pax when the book was first published, you now have two books you really should read!

Find this review on Sonderbooks at: www.sonderbooks.com/Childrens_Fiction/pax_journey_home.html