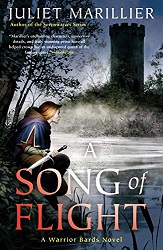 A Song of Flight

A Song of Flight culminates another wonderful fantasy trilogy by Juliet Marillier, the Warrior Bards trilogy.

A new problem has arisen. The prince of Dalriada has disappeared, after he and Liobhan’s brother Galen were attacked by strangers and Crow Folk. Galen is frantic to find him, and the warriors of Swan Island are called on to help.

At first Dau is sent without Liobhan, because she is too personally involved. But Liobhan has more experience with the Uncanny, so her skills will be needed.

At the same time, her brother Brocc and his baby daughter have been expelled from the Other World, because he was too compassionate toward the Crow Folk. But then an unscrupulous person sees his connection with them and forces him to help her with some sinister plans.

All these plot threads get woven together in satisfying ways, answering questions that were opened up since the beginning of the series.

Do read the other two books in the trilogy first. After you do, you’ll be as eager as I was to once again get immersed in this magical world.

Find this review on Sonderbooks at: www.sonderbooks.com/Fiction/song_of_flight.html