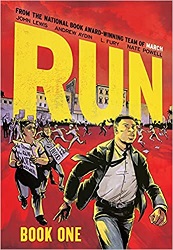 Run, Book One continues the story told in the award-winning series March, about John Lewis’s experiences during the Civil Rights Movement, this one beginning after the Voting Rights Act was signed. John Lewis got to see and approve of almost all the pages in this book before his death. I hope that the collaborators did enough work with him to continue the story, and I’m optimistic about that since they’re still calling it Book One.

We see lots of backlash against what they had accomplished. The book opens with members of the Ku Klux Klan on the march. There’s also conflict in SNCC, the Student Nonviolent Coordinating Committee, the organization for which John Lewis served as chairman for years – until dissent got him removed. The whole principle of nonviolence was being challenged.

A note at the back makes me appreciate how much historical research went into getting the detailed images in this book exactly right. They not only researched things like which models of cars were made that year, but also which cars people in any given neighborhood would drive. There are also short biographies at the back of people who show up in the book, and that section goes on for twelve pages. There’s so much detail and so much to learn in this book.

I thought it was interesting that the Black Panther party produced small comic books “explaining to new voters how they could vote for the new party, as well as the responsibilities and powers of the different elected positions they’d be voting for.” So this graphic novel comes from a long and fine tradition.

I am so thankful to the team of “Good Trouble Productions” for making sure that John Lewis’s voice can still be heard.

Find this review on Sonderbooks at: www.sonderbooks.com/Teen_Nonfiction/run_book_one.html