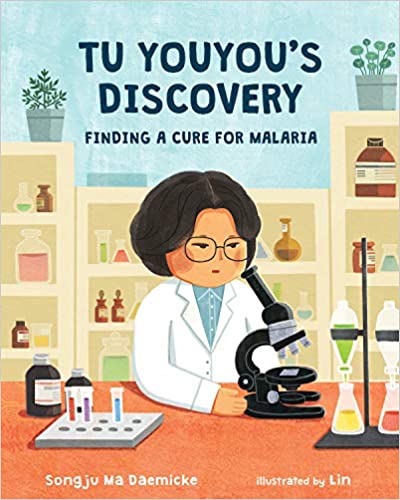 Finding a Cure for Malaria

Tu Youyou’s Discovery is a picture book that tells the story of how a Chinese lady born in 1930 studied Chinese Traditional Medicine in her modern research lab, and through much hard work discovered a cure for malaria. In 2015, she received the Nobel Prize in Medicine, becoming the first Chinese woman to win a Nobel Prize of any kind.

The story of her life and work is simply told in understandable terms. It tells about her research and stories in traditional medicine of an herbal remedy that sounded promising – but how it didn’t work in her many lab trials.

I like this part, told over four pages with simple illustrations:

Still, the experiments kept failing – more than one hundred with no success.

Some male researchers began to question Youyou’s leadership and doubt the direction of her research. Western countries with advanced technologies hadn’t found a cure. Was using herbal medicine to cure malaria an impossible goal?

But Youyou was stubborn. Her faith in traditional Chinese medicine was unshakable. She kept working and testing.

Then something incredible happened.

After 190 unsuccessful experiments, the test result of sample 191 stunned the team. The qinghao extract prepared at a temperature of only 94 degrees Fahrenheit had killed the parasites completely!

A lovely story of a remarkable female scientist.