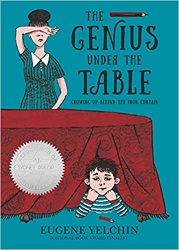 The Genius Under the Table

Growing Up Behind the Iron Curtain

Eugene Yelchin tells us his story of growing up in Leningrad under the Soviet regime. The characters in his story are larger than life, whom we meet on the first page, loudly complaining about American tourists cutting in front of them in the line to get into Lenin’s mausoleum.

Yevgeny was only six years old in that incident and was somewhat overwhelmed by seeing Lenin’s mummy. Their family lived in a cramped one-bedroom apartment and the only place for Yevgeny to sleep was under his grandma’s big table. He liked the private space under the table, and used the bottom of the table to draw pictures.

His mother worked for the Vaganova Ballet Academy, and was obsessed with Mikhail Barishnikov, the academy’s most famous graduate. This obsession gets woven through the book, as his mother wishes Yevgeny had talent like Misha. And their family’s discussion of the likelihood of him defecting gets their own building’s spy appointed to accompany him on his trip to Canada.

Yevgeny’s big brother Victor has talent – he’s a champion figure skater. But what can Yevgeny do? He fakes interest in ballet to please his mother, but that’s not going to work out very well.

Then propaganda starts coming on the radio and even among their neighbors against Jews. Eugene’s child’s perspective of all these events is both funny and poignant. And all of it is illustrated with his drawings – which he tried to reproduce from what he drew under his grandma’s table.

The book ends rather abruptly, after a very sad event. He tries to make it hopeful, and I know he ended up leaving Soviet Russia, but I wish the book had given a hint of how he got there.

Overall, this book is packed with humor and insight. A fun look for kids at a different world – behind the Iron Curtain during the Cold War.

Find this review on Sonderbooks at: www.sonderbooks.com/Childrens_Nonfiction/genius_under_the_table.html