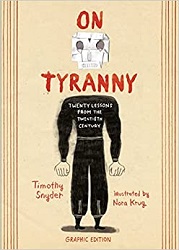 Twenty Lessons from the Twentieth Century

I think copying out the Prologue will explain well what this book is trying to do:

History does not repeat, but it does instruct. As the Founding Fathers debated our Constitution, they took instruction from the history they knew. Concerned that the democratic republic they envisioned would collapse, they contemplated the descent of ancient democracies and republics into oligarchy and empire. As they knew, Aristotle warned that inequality brought instability, while Plato believed that demagogues exploited free speech to install themselves as tyrants. In founding a democratic republic upon law and establishing a system of checks and balances, the Founding Fathers sought to avoid the evil that they, like the ancient philosophers, called TYRANNY. They had in mind the usurpation of power by a single individual or group, or the circumvention of law by rulers for their own benefit.

Much of the succeeding political debate in the United States has concerned the problem of tyranny within American society: over slaves and women, for example.

It is thus a primary American tradition to consider history when our political order seems imperiled. If we worry today that the American experiment is threatened by tyranny, we can follow the example of the Founding Fathers and contemplate the history of other democracies and republics. The good news is that we can draw upon more recent and relevant examples than ancient Greece and Rome. The bad news is that the history of modern democracy is also one of decline and fall. Since the American colonies declared their independence from a British monarchy that the Founders deemed “tyrannical,” European history has seen three major democratic moments: after the First World War in 1918, after the Second World War in 1945, and after the end of communism in 1989. Many of the democracies founded at these junctures failed, in circumstances that in some important respects resemble our own.

He continues to talk about the rise of fascism, Nazism, and communism in the twentieth century.

We might be tempted to think that our democratic heritage automatically protects us from such threats. This is a misguided reflex. In fact, the precedent set by the Founders demands that we examine history to understand the deep sources of tyranny, and to consider the proper responses to it. Americans today are no wiser than the Europeans who saw democracy yield to fascism, Nazism, or communism in the twentieth century. Our one advantage is that we might learn from their experience. Now is a good time to do so.

This book presents twenty lessons from the twentieth century, adapted to the circumstances of today.

The first lesson is “Do not obey in advance.” The first example is that several countries taken over by Hitler started persecuting Jews before they were ordered to.

Some other notable lessons are: “Remember professional ethics.” (Doctors should not be willing to experiment on prisoners, for example.) “Be wary of paramilitaries.” “Be reflective if you must be armed.” “Be kind to our language.” “Believe in truth.” “Learn from peers in other countries.” “Listen for dangerous words.”

The lesson “Be a patriot.” contrasts patriotism with nationalism. “A nationalist encourages us to be our worst, and then tells us that we are the best.”

A patriot, by contrast, wants the nation to live up to its ideals, which means asking us to be our best selves. A patriot must be concerned with the real world, which is the only place where their country can be loved and sustained. A patriot has universal values, standards by which they judge their nation, always wishing it well – and wishing that it would do better.

The Epilogue contrasts the politics of inevitability, eternity, and history.

The politics of eternity are “concerned with the past, but in a self-absorbed way, free of any real concern with facts. Its mood is a longing for past moments that never really happened during epochs that were, in fact, disastrous.”

I was a little surprised that his first examples of that were politicians advocating for Brexit in the United Kingdom and the National Rally in France. But yes, he does include “Make America great again.”

The only thing that stands between them is history itself. History allows us to see patterns and make judgments. It sketches for us the structures within which we can seek freedom. It reveals moments, each one of them different, none entirely unique. To understand one moment is to see the possibility of being the cocreator of another. History permits us to be responsible: not for everything, but for something.

The illustrator put many photographs from tyrannies in the twentieth century in these pages, along with disturbing images that will help the words strike home. The book was clearly updated in 2021, since it includes many statements from the Trump presidency and the events of January 6, 2021.

The result is a powerful book of history with warnings for today.

Find this review on Sonderbooks at: www.sonderbooks.com/Nonfiction/on_tyranny.html