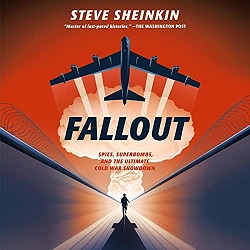 Fallout is a nonfiction book about the Cold War, leading up to the Cuban Missile Crisis. Steve Sheinkin takes a storyteller’s approach, telling you the stories of key figures, including many I’d never heard of before. Among others, these included a U2 pilot who got shot down over Russia, a Russian spy who tried to establish a network in New York City beginning soon after World War II, a paper boy who found a nickel that had been hollowed out to hold microfilm, and a Russian chief of staff of a submarine fleet who ordered a submarine captain and first officer not to launch a nuclear torpedo — after the world thought hostilities were ended, but the sub hadn’t heard about it.

The book is gripping and engaging and full of facts from witnesses. Although it takes place before I was born, I remember the climate when nuclear war seemed highly likely, even doing a drop and cover drill at my desk as a child, and being told by my parents that you could never trust the Russians.

Steve Sheinkin begins right after World War II and the development of bombs whose destructive force is hard to even imagine. He progresses through the space race and the rise of Castro and the development of the U2 program to fly over the Soviet Union. We hear about Khruschev’s ruthless rise to power as well as John F. Kennedy’s.

The one catch to this amazing audiobook is that my timing wasn’t good. I listened to it as Putin was threatening to invade Ukraine. Learning how several lucky coincidences saved us from World War III during the Cuban Missile Crisis, and learning that all-out nuclear war would mean the end of human life on earth as we know it — all made it disturbing to have Russia threatening war again, even in a different part of the world.

Find this review on Sonderbooks at: www.sonderbooks.com/Teen_Nonfiction/fallout.html