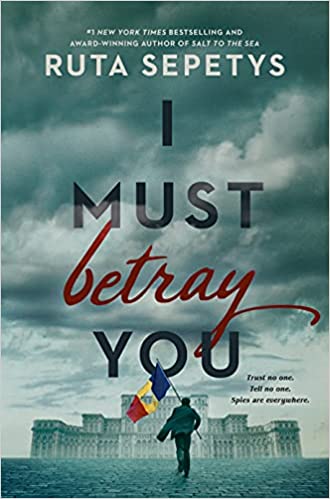 I Must Betray You

This is another book that’s sobering to read during the war in Ukraine. I wish this was ancient history, but I remember well when it happened.

I Must Betray You is set in Romania in 1989, during the last days of the Ceausescu regime — but seventeen-year-old Cristian Florescu doesn’t know they are the last days. All Cristi has ever known is his family’s bleak apartment, waiting in lines for goods, having to speak softly for fear of being overheard, pictures of the Ceausescus overlooking everything, and knowing that anyone might be an informer.

But when Cristian is called into the principal’s office, he hadn’t been prepared that now he needs to be an informer. His mother cleans the house of an American diplomat. Cristian is to accompany her and befriend the diplomat’s teenage son and report back. The reward? One he can’t give up – medicine for his grandfather, who is dying of leukemia. But the leverage is that the agent who interviews him knows about a dollar bill he got from an American from selling a stamp. That is illegal, and they threaten prosecution — unless Cristian does what they want.

But once he starts as an informer, he doesn’t know who he can trust. And then, when the girl he’s had his eye on for ages actually shares a Coke with him — State Security finds out, and she accuses him of being an informer.

And that’s only the beginning. Through associating with the Americans to spy on them, Cristian finds out about protests in other Eastern European countries. Maybe Romania doesn’t have to be this way?

Several awful things happen in this book. The fight for freedom in Romania wasn’t easy. But this book tells the story from the perspective of a young person trapped by the regime, but who dares to dream of a better life.

I also appreciated the Epilogue, which showed that overthrowing the Ceausescu regime didn’t instantly resolve all problems. There are also historical photos at the back, taken in Romania in the 1980s.

Find this review on Sonderbooks at: www.sonderbooks.com/Teens/i_must_betray_you.html