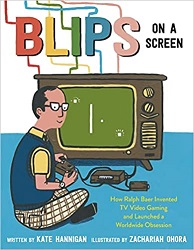 Blips on a Screen

Here’s a picture book biography of the guy who invented the first video game. I think of creating video games as something for people who are good with computers, but Ralph Baer came at it from the perspective of someone skilled in electronics and understanding how televisions work. And of course that makes sense, because video games came along before home computers.

Rolf Baer was born in Germany, but his family fled from Hitler and the Nazis in 1938 a few weeks before the border closed. In America, he changed his name to Ralph.

Ralph was always interested in inventing. He worked in radio repair and used his radio skills during World War II. From there, it was a natural next step to work on televisions. He worked for military electronics, but couldn’t get over the idea of figuring out how to play games on a TV.

The book tells about the process he went through, which included getting a patent, so his company was able to license his new invention when the boom took off. But before that happened, he got plenty of rejection for his idea. But after the Odyssey finally came out in 1972, it began a new obsession with video games.

The book makes the process understandable and accessible to kids. I always love Zachariah OHora’s illustrations, and his cartoons give a simplified picture of the essentials of this story.

This book tells about an inventor who created something important to kids and it also talks about the process of getting an invention produced — in a fascinating and informative picture book.

Find this review on Sonderbooks at www.sonderbooks.com/Childrens_Nonfiction/blips_on_a_screen.html