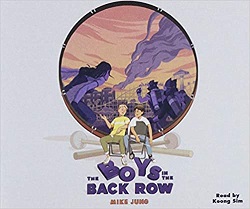 The Boys in the Back Row

I missed this book when it came out because I was judging for the Cybils Awards in a different category, but I’m glad I finally caught up. The reader is excellent, making you believe you’re hearing the voices of middle school boys.

Matt and Eric are starting another year of middle school. This time, instead of flute, where he was the only boy, Matt is playing bass drum, so he’s in the back row with his best friend, Eric. But there are some bullies in the back row, too.

Early in the year, the band learns that they’re going to compete in a band competition at World of Amazement at the end of the year. (I love the names Mike Jung invents for amusement parks and comic book characters!) But then they learn that Eric’s family is moving away after the year is done. So the final piece that sets their planning in motion is when they also learn that on the last day the band will be at World of Amazement, there’s going to be a DefenderCon where their favorite comic book creator is signing comics — just a mile away from the amusement park. Of course they have to go, in a final adventure together as best friends.

The catch is that they also realize they won’t be able to get permission. But if they can manage to keep things quiet, they might be able to pull this off. But then a back row bully finds out what they’re up to….

Naturally, I didn’t expect all to go smoothly with their plans, but I still was completely surprised by what happened. And the tenderness at the end almost brought tears to my eyes.

This all sounds serious, but the book is full of humor throughout, fun nerdy humor, the best kind.

Let’s hear it for nerdy middle school boys who care deeply about their friends!

Find this review on Sonderbooks at www.sonderbooks.com/Childrens_Fiction/boys_in_the_back_row.html