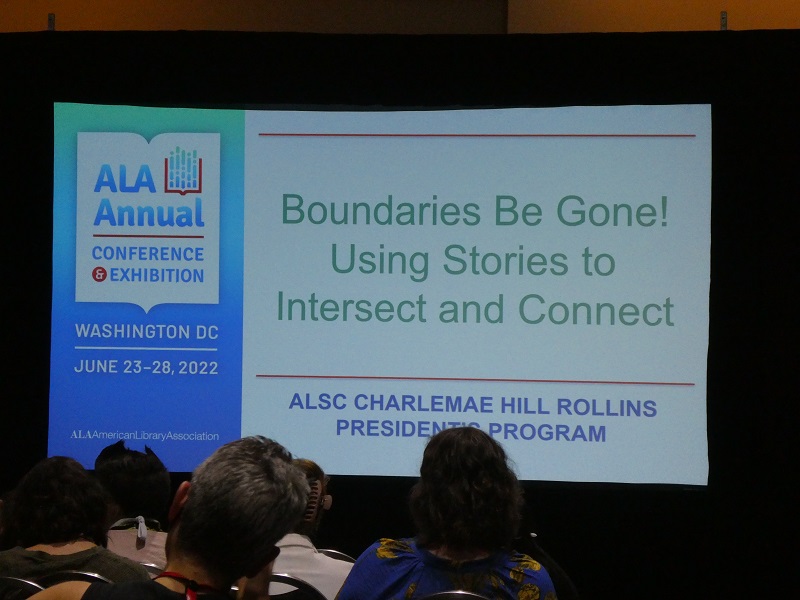 On Monday, June 27, 2022, the fourth day of ALA Annual Conference, I stumbled a little late into a program called “Boundaries Be Gone! Using Stories to Intersect and Connect.” I missed the first speaker, Dr. Cora Dunkley, but have some great notes from those who followed: 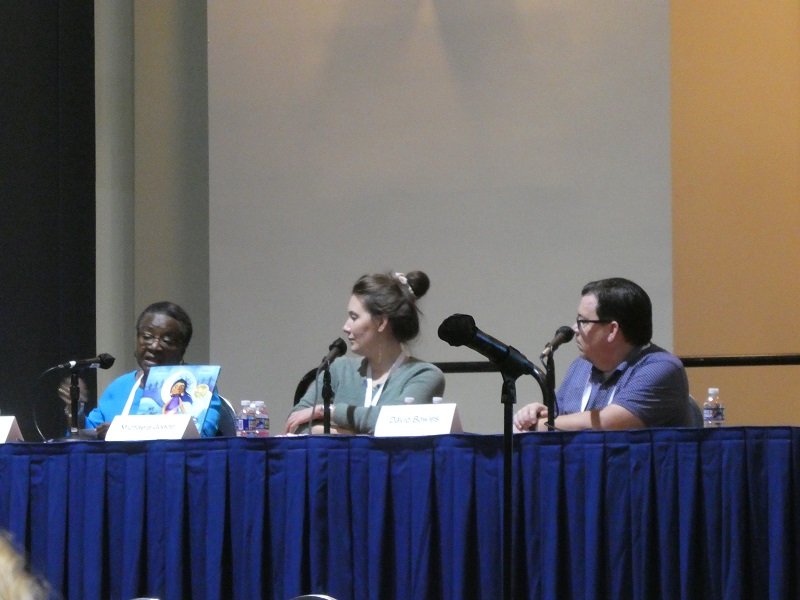 The first speaker I got to listen to was Michaela Goade, the Caldecott-winning illustrator of We Are Water Protectors. 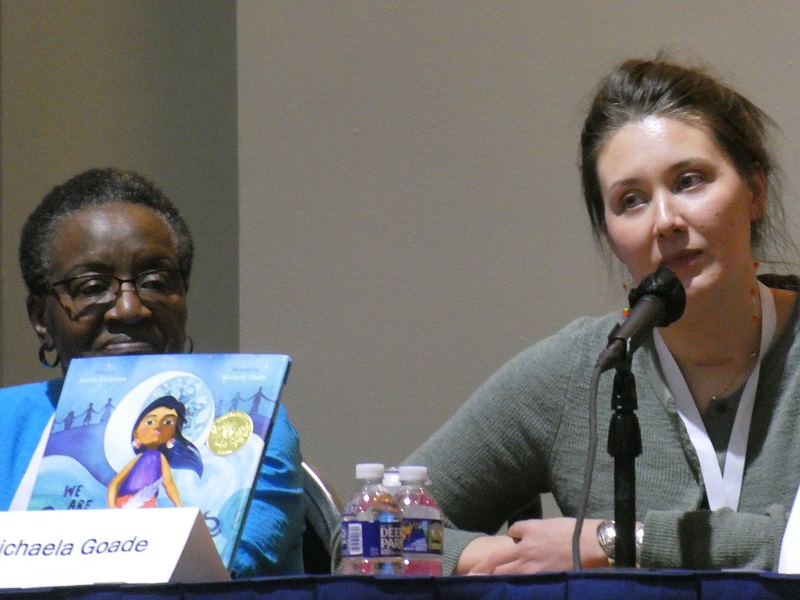 She is indigenous and grew up in Juneau and Sitka.

She wants kids to feel seen and powerful. Indigenous roots are a superpower.

She grew up with shame. Storytelling is so important, and the books she had weren’t written by indigenous people. But the native kid lit community is growing! There are more tribe-specific books. We’re all working together toward greater awareness.

These different communities have their own unique histories and traditions. They’re trying to communicate the breadth. There’s no one way to be indigenous.

She’s part of an organization making Native books for Native peoples. Working with authors from different indigenous communities. They use the author as the anchor. They focus on emotion and universal calls to action.

Unfortunately, We Are Water Protectors will always be relevant.

We need non-indigenous folks to see and love on these books.

The next speaker was author David Bowles. 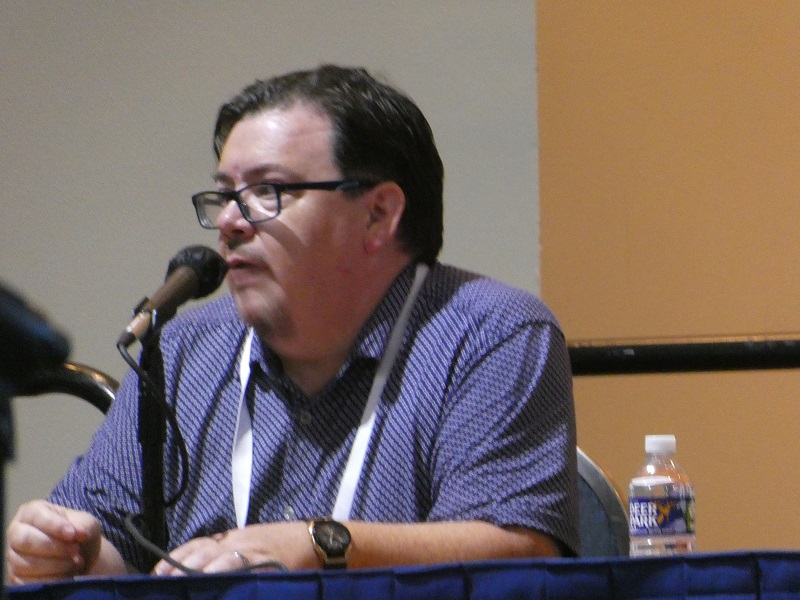 There’s a liminal space in borders. He grew up in a transnational place. Borders can be porous but important. You see yourself as someone defined by the boundary. Inside of you is this liminal space, a convergence of heritages.

He’s from a family of storytellers. His grandmother was a cuentista who refueled the stories.

His mother took him to the library every day in Kindergarten and he saw that the language in books was different. He knew he wanted to do something with story. He’s both a cuentista and a writer.

Even growing up on the border, the books had nothing about Mexican heritage. He felt a calling and needed to be a teacher first, paying a debt to the community.

The system kept people in their place. He needed to breach the boundary between teacher and student. He didn’t want to be above them talking down to them.

How do our boundaries intersect? Boundaries are important, but not impermeable.

He began a journey digging into his roots, de-centering the European part.

Cross over boundaries in yourself and reach out in solidarity to others.

A central thread in his work is rooted in the experience of living on the border. He wants these books to broadcast to others that these stories matter and are beautiful. There’s so much overlap in humanity.

Banning books tries to make permeable boundaries into concrete walls. If you control what kids are exposed to, it’s easier to try to make everyone the same.

After the speakers were questions and answers. My favorite comment from that was when Michaela Goade said that being the first (Indigenous Caldecott Winner) feels great but not great. The tricky part is that then you’re expected to be an ambassador.

I went to a couple more sessions, including the Stonewall Awards celebration, wrapping up a wonderful time at ALA Annual Conference, in person again. 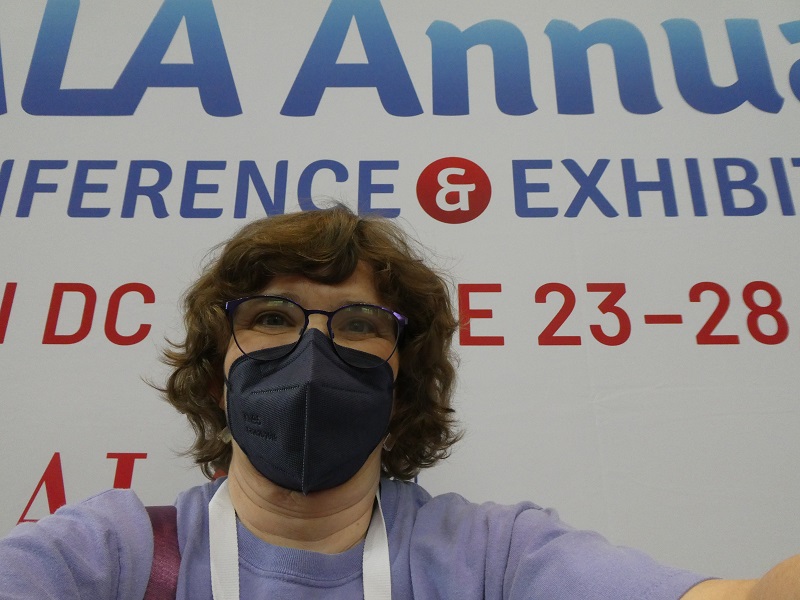