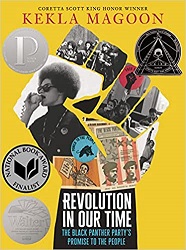 Revolution in Our Time

The Black Panther Party’s Promise to the People

Revolution in Our Time is an amazing work of scholarship, telling the complete history of the Black Panther Party for young people, complete with hundreds of photographs and plenty of sidebars and analysis. It won multiple Honor awards, and the meticulous research and clear presentation make it an obvious choice, even for awards that are usually won by novelists.

I didn’t know much at all about the Black Panthers. And honestly, all my impressions of them were negative. I certainly didn’t know that much of their reason for existing was to protest the same disproportionate police violence against Black people that still exists today. But it went much further than that. They wanted to help Black people in poverty and help Black communities come together. Reading this book helped me understand the organization was much more nuanced than anything I’d heard about them.

The Panthers fought a revolution in their time, just as we are fighting one in ours. They were called troublemakers, terrorists, and branded as anti-American, but the truth of their work belies these labels. They boldly claimed their place at the vanguard of a centuries-old fight for equality, and their legacy continues to lead the way forward. The story of the Black Panther Party is one of violence and heartbreak and struggle and conviction. It is the story of a group of young people who set out to change the world around them — in very radical ways.

They came up against many obstacles — including an FBI effort to stop them. They had many successes and many failures. This book tells their complete story, and it opened my eyes.

I was especially interested to learn that especially at the beginning, they were careful to follow all laws. They “policed the police” following police actions with legally owned guns, to protect people in their neighborhoods from police violence. I’m afraid I’m not surprised this resulted in some changes to what was legal.

I like the way the last chapter focuses on how young the founders of the Black Panther Party were. There is a reason the author targeted this amazing work of scholarship to young people. Here’s a paragraph from that last chapter:

I discovered an archival video in the course of my research, with former civil rights movement leaders who were looking back in the early 2000s at their own words and convictions of the 1960s. They declared in retrospect that the biggest mistake of the civil rights era was to believe that all the problems could be solved in their lifetime, and they failed to train the next generation to take up the mantle in the necessary ways to maintain the struggle. My own life experience bears this up in a lot of ways: young people are often underestimated and excluded from challenging conversations. Whether it’s to protect the children, or due to a misguided faith in their own power to solve everything, the perennial mistake of elders is to dismiss the power and potential of youth. On the flip side, the mistake of youth is often to dismiss the wisdom and experience of those who have gone before. In their day, the Panthers didn’t make either of these mistakes. They placed the core of their emphasis on building a cadre of revolutionary youth, and they promoted empowerment through education about Black history. They were undermined and overturned at every stage, perhaps partly because of the truly systemic nature of the change they envisioned, and the fact that they made real progress in these directions in a very short time frame.

Not that the author paints a completely rosy picture of what the Black Panthers were trying to do. But whatever you know about the Black Panthers, I suspect this book will give you a fuller picture. An amazing story of people who wanted to bring about equality and were willing to fight to get it.

Find this review on Sonderbooks at: www.sonderbooks.com/Teen_Nonfiction/revolution_in_our_time.html