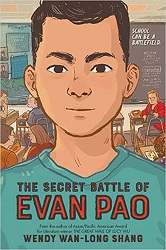 The Secret Battle of Evan Pao

Scholastic Press, 2022. 259 pages.
Review written from my own copy, signed by the author at ALA Annual Conference
Starred Review

The Secret Battle of Evan Pao is the first book I ordered in my new position as Youth Materials Selector for my library system, after I saw the author at ALA Annual Conference, and she told me the book had been selected for the Washington Post Kid’s Summer Book Club. Of course we needed copies for all the branches! (Alas! We had a big backlog in our Processing department, and the book was not on the shelves for readers when it was featured in the book club. I tried!)

This book is about racism and prejudice in a rural Virginia town, but it’s much more nuanced than that description suggests.

I love the main character, Evan Pao. (Though we do get chapters from the perspectives of several other kids.) Evan is a “sensitive” boy — in fact, he’s got a condition where he feels sick when someone lies to him. So he’s a good lie detector for his family. But he doesn’t understand how he never knew that his dad was going to leave their family.

As the book begins, Evan, his mother, and his sister are moving from a prosperous life in California to a run-down rental house in small-town Virginia, to be near his Uncle Joe. Evan hopes maybe in the new place he can get a dog, but he’s not optimistic.

But Evan isn’t prepared for how important the Civil War is in his new town. (I grew up in California and also moved to Virginia. I, too, thought this was strange, though it’s not nearly so extreme in northern Virginia.) He now attends Battlefield Elementary, where his class is making preparations for the annual Battlefield Day, where class member dress up as roles their ancestors may have played in the Civil War. Evan’s afraid there’s no place for him, and one kid in particular makes it clear he’s pretty sure Chinese Americans don’t belong.

But then Evan learns that Chinese Americans did have parts in the Civil War, and Evan begins to claim his place. There’s pushback, though, and it all adds up to a story that challenges everyone’s assumptions, including the reader’s.

In Wendy Wan-Long Shang’s hands, we’ve got a fantastic school story for middle grade readers that shows that history is for everyone, and you can’t make assumptions about what anyone is capable of. A great read.

Find this review on Sonderbooks at: www.sonderbooks.com/Childrens_Fiction/secret_battle_of_evan_pao.html