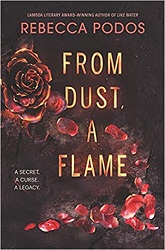 From Dust, a Flame

Wow. This is one of those books I can only describe as intricately woven.

The story begins simply enough. It’s the eve of Hannah’s seventeenth birthday, and what she wants is to get to go to summer school to improve that one B she got. But her mother insists they can’t afford it, even though she’s dragged them all around the country until Hannah got into Winthrop Academy. Then her big brother Gabe lets down their birthday tradition by not staying awake until her birthday hits. But those annoyances fade to insignificance when, on her birthday, Hannah wakes up with yellow eyes, slitted like a snake’s.

But before they can do anything, the next day she wakes up with a new deformity, ranging from fins to scales to claws. They always go away in the night, and she always wakes up with something new.

Hannah’s mother takes the problem to heart. She says she knows a specialist who can fix the problem, and Hannah and Gabe should stay in their apartment. She’ll be back in a few days.

Instead, their mother is gone for weeks. So when they get a mysterious note telling them about their grandmother’s death — a grandmother they didn’t know existed — they show up to sit shiva with a big Jewish family they knew nothing about.

After they get to the home of relatives, we start getting occasional chapters telling us about what happened when Hannah’s mother was seventeen and why she left her mother’s house, never to return. And that story has to do with her mother’s mother, the one who recently died, and her history in Prague before the war, as well as stories she brought with her, and maybe something more tangible.

There are stories within stories here, and ultimately deep danger to Hannah and everyone she loves. This book is wonderfully woven and involves golems and sheydim and amulets from Jewish folklore.

Find this review on Sonderbooks at: www.sonderbooks.com/Teens/from_dust_a_flame.html