To me, the highlight of ALA Annual Conference is the Newbery – Caldecott – Wilder Banquet. I guess it goes back to when I was first actually writing things to submit for publication. At the time Writer’s Digest had a t-shirt that said “Pulitzer Prize Winner (in training).” I’d never heard of a writer for children winning a Pulitzer, so that shirt didn’t catch my imagination. But I thought of a t-shirt that would have thrilled me: “Newbery Medal Winner (in training).”

No, I really don’t expect to ever win the Newbery Medal. Not at all. But if I ever daydream wild dreams, that’s where mine go.

I was so delighted when I started subscribing to Horn Book Magazine years and years ago and discovered that they print the winners’ speeches. I saved all those copies so I’d have past speeches to study if I ever won!

And my writer’s critique group made a pact that the first one of us to win the Newbery would pay for the other three to come to the Banquet! (No, we don’t expect to ever be called on to do this, but it’s a fun pact!)

So when ALA Annual Conference was in DC in 2007 and I found out you could get tickets to the Newbery Banquet, I was thrilled to do so. Susan Patron was the Newbery winner that year and David Wiesner the Caldecott winner, and I was completely enthralled by their speeches.

Last year it was again in DC, and I attended again and met lots of authors during the cocktail hour before.

This year, my plan was again to do lots of schmoozing before. I had bought a new dress, but decided to wear my red dress from last year. Actually, I think more people remembered me that way!

However, when I was all dressed up and ready to walk around the corner and a block down to where the Banquet was being held — there was a torrential downpour! I went back to my room for my umbrella, then tried to wait out the storm — to no avail. Finally, I ventured out with the umbrella and made it with only wet feet. Not as much fun as schmoozing with authors, but there was still a little time for that.

And first, I saw my fellow Children and Technology committee members, Travis Jonker from 100 Scope Notes, and John Schumacher from Mr. Schu Reads. I’d met Travis the night before, and he introduced me to John. They’re both very nice, and I love seeing men as Elementary School Librarians (Good ones, too! — You can tell from their blogs.) You can see why I wanted a picture with them, all dressed up: 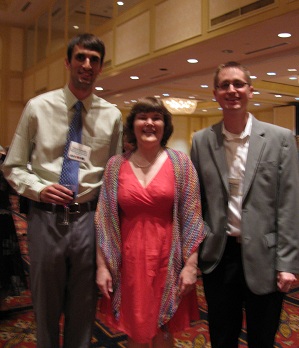 Last year, I met author Jim Averbeck, since he was at another table organized by our mutual friend Susan Kusel. So I went in quest of another picture with him (as long as I was getting pictures with good-looking men, he came to mind quickly). Well, he was doing his Red Carpet Interviews, and he asked if I wanted to be interviewed! So I decided that an interview trumped a simple picture. (Though I did find myself feeling like the writers who were in the Library of the Early Mind movie — wishing I could edit my words.)

Then I saw James Kennedy. I’d met him last year and had bought his book — And I started reading it on the plane. So I told him this, and that I was really enjoying it. I ended up tweeting about it as I read on — so I was happy that I really did find it brilliant and funny!

Here I am with James Kennedy: 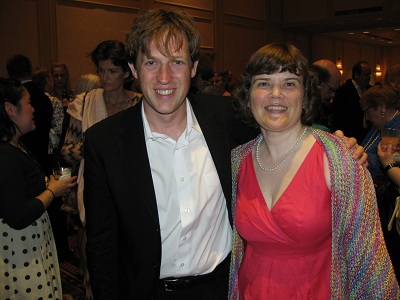 Well, I was about running out of time, but I again saw Maureen Johnson, together with Ingrid Law, both of whom I’d gotten books signed by earlier that day. I kind of apologized to Maureen for running into her so much, and she was very nice about it. She even got things around to my own writing. She said the key to getting published is persistence, which is a good word! I became more her fan than ever. She’s so nice!

At the banquet, I’d gotten into a table organized by Sharron McElmeel of McBookWords, and had some very distinguished dinner companions.

On my immediate left were Kay Weisman and Shirley Duke, both delightful conversationalists: 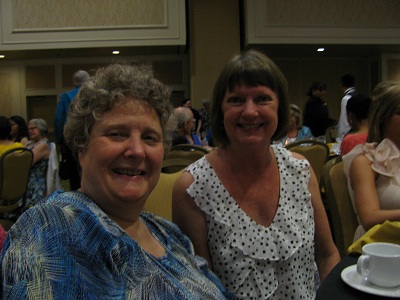 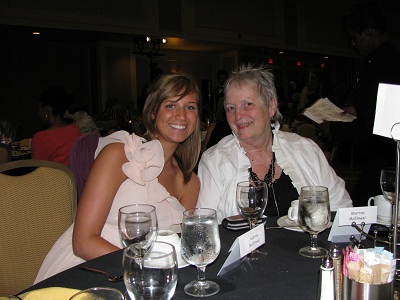 Here are Arianna Lechan and Deb Logan (Sorry for the blur!): 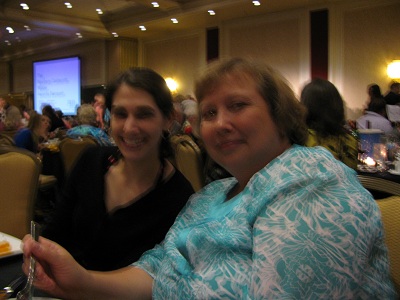 And then Anastasia Suen, Wendy Stephens, and Susan Polos: 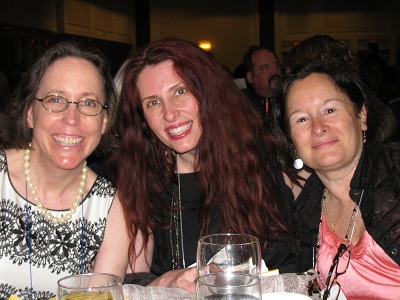 You can tell everyone was having a great time!

Then the speeches! This year both the Newbery and Caldecott winners won on their first book. I was expecting extra emotional speeches, and I was not disappointed!

Most of the pictures I took were too blurry to show, but I did get a few fun ones. (The key is taking LOTS!) 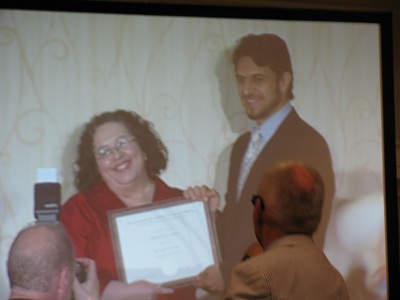 And here’s Erin Stead giving her Acceptance Speech for the Caldecott Medal for A Sick Day for Amos McGee: 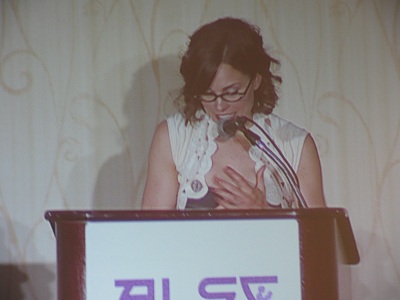 Her speech was emotional and beautiful, with her sniffling most of the way through. (It was sweet!) She talked about a “huge planet of gratefulness.” The story of how she came to illustrate A Sick Day for Amos McGee is very moving. As Erin said, it’s so appropriate that it’s a “book about having good and loyal friends.” She actually hadn’t done any drawing at all for three years.

Her husband wrote A Sick Day for Amos McGee, but it began this way:

“At the end of the third year, I was unable to ignore the fact that without drawing, a part of me was missing. With a lot of patience and encouragement from Philip, I began to draw a picture that had been knocking around in my head for years. I did it at the kitchen table so as to not overwhelm myself, a little bit at a time. It was a very tiny drawing.

“It was a drawing of an old man and an elephant.

“It is a tremendous gift to have people in your life that know better than you.”

Her husband and his editor were the ones who convinced her to do the book. So everyone owes them a thank-you!

I also loved what she said about picture books:

“I never grew out of picture books. I believe in them. A picture book allows a child ownership of art — even if it’s just for the two weeks they check it out of the library. That book is theirs. I’m not sure any other art form replicates that feeling.”

“I believe the best books translate through time because they tug at something true within us.”

“I believe there is an infinite beauty in the limitations of paper books…. The more flash and whiz-bang we add, the more we limit the possibiloities of our own imagination. Books are simple. They must be felt. The copies of my very favorite books are not pristine. They are worn and dog-eared and a little bit dirty because they are loved.” 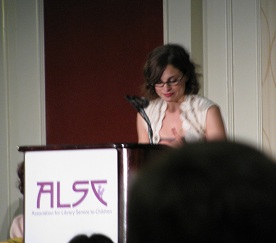 Then they gave out the Newbery Honor Awards. I love the exuberance of Rita Williams-Garcia: 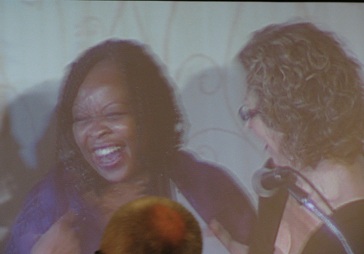 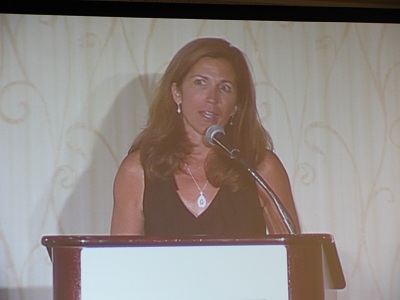 She talked about the spirit she gained from her family that enabled her to write a book:

“Their approach to life is what gave me the wherewithal to write a book. To work hard at it. To try and try again after many attempts and many rejections. Figure it out. Make it work. Keep at it. Their confidence and their optimism allowed me to dream big and set lofty goals.

“But even with that spirit, that optimism, that determination, I never set out to win a Newbery. I never even dreamed of it. And I have always dreamed big! Just not that big.”

Like me, Clare Vanderpool was in a writers’ critique group for many years where she was the only “yet to be published” writer in the group. She said, “Without them I would still be an aspiring writer.”

I love this analogy: “Someone asked me recently if winning the Newbery is as wonderful as having a baby. That analogy falls a bit short, but it is like having a baby if you didn’t know you were pregnant.”

About her book, Moon Over Manifest, she said, “I knew I wanted to write a story about place and about home from the perspective of a young girl who didn’t have a home.”

“I try to approach my writing the same way I approach everything else in my life. Work hard at it and have fun with it. Enjoy the experience.”

“What is a true place? What would a true place be for someone who had never lived anywhere for more than a few weeks or months at a time?”

“And story — the way we give voice to our laughter and tears.”

“Your story touches mine and mine mingles with yours, and as writer and reader we throw in our own ingredients to the story pot to simmer and stew, to make something new, something greater than the sum of its parts.” 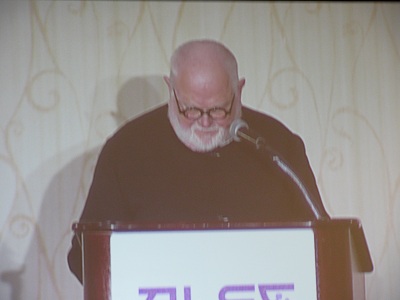 Tomie’s speech was a lot of fun. He explained how his career began when he was four years old:

“Even though no one asked me, I announced, ‘When I grow up, I am going to be an artist. I’m going to write stories and draw pictures for books, and I’m going to sing and tap-dance on the stage.”

“Every chance I got over the next few years, I would tell the grownups around me what the future held for me, and they all took me seriously.”

I love it that when he finally got his big break and an illustration assignment for a picture book, “There was a hitch. I also had a job for ten weeks in Provincetown for — you guessed it — a musical revue in which I would sing and dance on the stage.” So little Tomie had his whole dream come true!

One of his early reviews said, “Good facts, but the illustrations by first time illustrator dePaola are far too imaginative for a science book.” He was thrilled.

And I love this image: “This is what I do. I call little four-year-old Tomie to sit on my lap when I write and when I draw. He tells me what is true.” 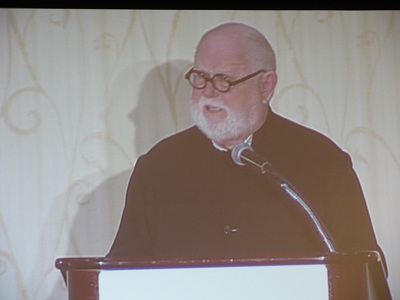 What a beautiful evening! I’ll plan to begin blogging about the 4th and last day of ALA Annual Conference 2011 tomorrow.