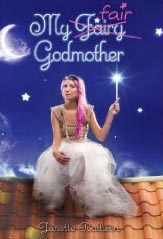 In fact, she seems a bit hung up on fairy tales. Savannah learns that life as Cinderella or Snow White is not much fun. Then she thinks she makes a wish that can’t be twisted — and ends up stuck in the Middle Ages until a nice guy from school can make himself a prince.

I admit I was thrown a bit at first, because the book started from Jane’s perspective. I was completely delighted to have a handsome, intelligent guy see the light and fall for the plainer, calculus-loving sister for a change! Oops! We weren’t supposed to be happy about that….

Well, several chapters further on, I was able to drum up some sympathy for Savannah. I must admit I’m not sure she didn’t deserve a few weeks as Cinderella, but she got them, and they did their work. Mostly, the author does a grand job making a delightful mess of fairy-tale situations and magic and the meaning of love.

Here’s a passage after Jane and her boyfriend get pulled into the Middle Ages, too:

Then I had to explain to Jane and Hunter how my fairy godmother had misunderstood certain statements I’d made and had sent Tristan back in time to become a prince. He still had two tasks left before he could achieve that goal and return to our time.

“Kill a dragon?” Hunter said as though he both envied and feared for Tristan. “Can you do that?”

Jane shook her head, disbelief seeping into her tone. “But your leprechaun told us that all you had to do to come home was to ask your fairy godmother.”

“Oh, well, that just means you were duped by a leprechaun,” I said.

Hunter cocked his head and looked at me narrowly. “Your fairy godmother won’t help you at all?”

Jane sat down on my bed and rubbed at her forehead wearily. “Well, that figures.”

I followed her with my gaze. “Meaning?”

“They must match fairy godmothers to people by type. You pretty much just described yourself.”

A truly fun tale of a clash between modern high school dating and fairy tales as they would be if you actually had to live in them.

Find this review on Sonderbooks at: www.sonderbooks.com/Teens/my_fair_godmother.html