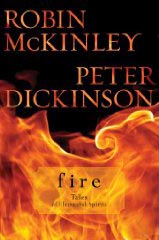 by Robin McKinley and Peter Dickinson

I found it amusing that the two books I was most eager to read as soon as I finished the assigned reading for my Newbery class were both titled Fire. I confess that even though Robin McKinley is one of my very favorite authors, I read Kristin Cashore’s Fire first, because I generally find complete novels more compelling than short stories.

This collection of five tales, with two by Robin McKinley and three by her husband Peter Dickinson, is truly wonderful. The theme is fire, and we have tales of a phoenix, a hellhound, a fireworm, a salamander, and, of course, a dragon.

I think my favorite was Robin McKinley’s story about a girl with a compassion for animals who takes on a scrawny dog even though he his eyes are rimmed with fire. Her compassion is rewarded when the uncanny dog takes on the hosts of hell for her.

None of the stories is weak. In “Phoenix,” by Peter Dickinson, Ellie learns what happens to someone who befriends a phoenix. In “First Flight,” Robin McKinley quickly develops a world where dragons fly through Firespace with their third eye. A boy and his humble Foogit help their brother’s dragon, who has been injured and has only two eyes.

Of course, my only complaint is that I’d enjoy spending more time in each of these worlds and with all of these characters. Each story contains the seed for a delightful book.

For a quick jaunt into five magical worlds, Fire delivers five memorable experiences. Definitely up to the standards of these two outstanding writers.

“I think that it’s the glitter of dragon eyes that’s the origin of all those stories about the beds of jewels that wild dragons are supposed to have made for themselves back in the days when dragons were wild, and used to eat children when they couldn’t find any sheep. Where all those jewels are supposed to have come from was always beyond me; even if you put all the kings and emperors and enchanters (good and evil) together and stripped them of everything they had, I still don’t think you’d get more than about one jewel-bed for one medium-large dragon out of it. But you see the glitter of the eyes and you do think of jewels. Nothing else comes close — not fire, not stars, not anything. Of course I, and most of the other listeners to fairy tales, have never seen more than the mayor’s beryl or topaz or whatever the local badge of office is, but we can all dream. When you see a dragon’s eyes up close — if you’re lucky enough to see a dragon’s eyes up close — you don’t have to dream.”

Find this review on Sonderbooks at: www.sonderbooks.com/Teens/fire_tales.html