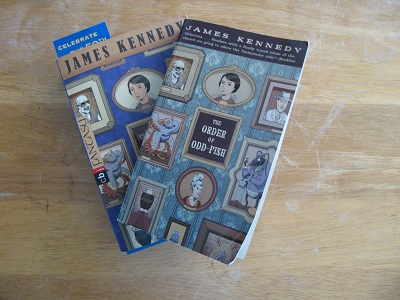 It’s time for Sonderling Sunday! Where we play with words in all their nerdy glory, by looking at the German translation of The Order of Odd-Fish, by James Kennedy, in the volume Der Orden der Seltsamen Sonderlinge.

I’m on Chapter Seven, which begins on page 60 in the English version and on page 78 in the German translation.

My caption comes from the first sentence. And I will continue, because it’s too full of wonderful words and alliterative delights not to mention:

“Here’s to villainy!” cried Ken Kiang, lifting his glass. “Here’s to wicked work well wrought! Here’s to outrage, injustice! Violence and venom! Marvelous murderers and cutthroat criminals! I embrace you all, brothers! I’m one of you now!“

How will the translator deal with this? Will he attempt to retain the alliteration? Will he simply define the concepts as closely as possible? Will he retain the rollicking, roll-off-the-tongue language? The feeling of criminal glee in a moment of apparent triumph?

Here’s what the translator presents us with:

Some other phrases to look at:
“villainy” = Schurkerei (Google translates this word “roguery”)

“Marvelous murderers”= Makellose Morde (“flawless murders,” which is not quite the same thing, but worth it for the alliteration.)

Later, as Ken Kiang confesses:
“Until tonight, I was all hat and no cattle!” = Bis heute Nacht habe ich nur gebellt, nicht gebissen! They didn’t attempt the cowboy metaphor, but translated it as “I’d only barked, not bitten.”

schlüpfrig schiefe Bahn is almost, but not quite, as good as “slippery slope” because the slippery sound of schlüpfrig schiefe almost makes up for the out of place word Bahn. But I’m sorry, “slide down” fits much, much better into the sentence than hinabzugleiten! I do have to say that sü?en Sünde is much more seductive sounding than “sweet sins.”

Moving on, I’d like to say a little bit about Pie.

Hoagland Shanks is obsessed with pie. This is translated as “Kuchen.” Now, I always was told that “Kuchen” is “cake.”

Ah, but some things are un-translatable! I’m not crazy about a lot of German food. Not a big fan of various kinds of Schnitzels. But anything that comes from a German bakery? Outstanding.

This kind of explains why my dear German friend, Elfriede, called all of the wide range of German pastries, “cake.” They were called Kuchen, which she’d been told is the English word “cake.” But, truth be told, we simply don’t have English words for all the kinds of German kuchen available.

For example, when Elfriede would take a break and go to the “coffee place,” she’d always want to bring me something, and she’d ask what I wanted: “fruity or creamy?” One of my favorites was Flockensahne which was almost (but not quite) a phyllo dough filled with cream. (Ha! I found an image on the internet. Follow the link to see the credit for this image of Flockensahne.) 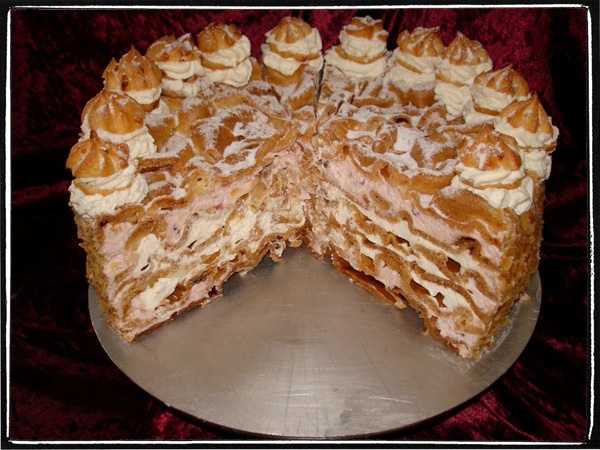 Would you call that Pie? Certainly not! But it’s not exactly cake either.

And when we’d go there on my birthday in June, I’d always have one of the concoctions that involved fresh strawberries. This Erdbeerkuchen is similar to strawberry pie. Similar, but not the same.

Mmmm. I’m getting so hungry. Thinking about those wonderful birthdays in Germany always makes me nostalgically sad. (The weather is always perfect in June as well. We’d go to a castle for dinner…..)

However, as it appears that Americans do not have words to adequately describe German Kuchen, neither do Germans have words for pie. This is perhaps appropriate, since haven’t we all heard the words “as American as apple pie”?

I like where Hoagland Shanks tells Ken Kiang to stop waxing so eloquent and get him some pie:

I have to mention this one:
“The Club of Weird Desserts” = dem Klub der Sonderbaren Desserts

A candidate for longest word!
“dormant taste buds” = schlummernde Geschmacksknospen (Yes, you pronounce both those ks.)

Oh! I spoke too soon! Here’s one with 23 letters:
“black-and-white TV” = Schwarzwei?fernsehgerät

This translation doesn’t come out as catchy:
“A deal’s a deal.” = Eine Abmachung ist eine Abmachung.

There we have it! That’s it for Chapter Seven. Summing up:

Most fun to say: sü?en Sünde

Best use of the prefix Sonder: Sonderbaren Desserts

Tune in next week as we find out what happened to Jo and friends!