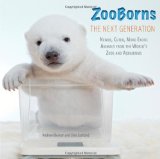 ZooBorns: The Next Generation

By Andrew Bleiman and Chris Eastland

I booktalked this book at the local elementary schools when promoting the library’s Summer Reading program at the end of the school year. This was an example of a book that booktalked itself. All I had to do was show the pictures. Such cuteness! And in a few cases, such freakiness! (The aye-aye baby, for one, doesn’t look like it could possibly be real. I would guess they actually took a picture of a muppet if I didn’t know better.)

The book consists of pictures of baby animals from zoos and aquariums from all over the world. They’re babies. They’re cute. I only had to show a few, and I’d have a crowd of little girls after the talk, ooing and ahing over this book.

But it is also packed with lots of facts. Besides exotic animal species – Have you heard of the Polynesian tree snail? The South American coati? The epaulette shark? The klipspringer? – there are plenty of pictures and facts about all the animals. The book tells the particular animal’s name, species, home, and birthdate, as well as their status (whether endangered or not) and several facts about the species. It’s fascinating stuff, mixed in with a whole lot of cuteness.

Find this review on Sonderbooks at: www.sonderbooks.com/Childrens_Nonfiction/zooborns.html